Karaithivu is one of the areas worst hit by the 2004 Boxing Day tsunami, in Ampara District of the Eastern Province. Buildable land is scarce in Karaithiv, which is sandwiched between the vast stretches of paddy fields and the densely populated coastal belt and inland settlements. The reservations created by the Lagoon and the Access Road, further challenged the Architect of building a school on a compact narrow linear site, measuring 95ft. by 300ft, a reclaimed land along, the lagoon bank using tsunami debris.

The brief provided an opportunity to design a building that immersed itself into its context, as a building that can contribute to and formed part of the landscape. If the ground plane was a natural scar on the landscape due to the tsunami, could the new building effect a new condition that repaired and rejuvenated it. Could a built solution contribute to the context of an existing location? These questions informed the built solution, the selection of materials, articulation of interior volumes and the resolution of the architectural form itself.

The resultant 36 feet by 275 feet footprint on 95 feet by 300 feet site meant that more than 65% of the site was left undisturbed, as a play area for the school children. Architectural language had to be well thought off to give the building its character, and to capture the needs of this special group of children, who were shaken by the worst natural disaster to hit Sri Lanka in living memory. Resultant architectural language is an exercise in restraint, precision, simplicity and elegance.

The school is one classroom wide and three storeys high, with internal spaces aligned along North and stepping down a set of steps towards the lagoon on the East. All classrooms enjoy the views of the lagoon. The site constraint automatically generated the narrow linear shape of the building and the school was designed with a dual face contrasting in character to each other, one facing the access road and the other the lagoon.

The façade facing the access road and the tsunami settlement beyond has a comparatively solid character. The openings are comparably smaller and protected by overhanging sunshade boxes cantilevering out of the two and a half storey face. The composition of solids and voids on this elevation has created a certain amount of privacy and a sense of discipline without making it too imposing. The double height corridor created at the access road side, as a result of the staggered section of the building has linked the outside world and school premises visually, so that the school could maintain its required privacy without shutting the outside world completely. The column and beam grid framework structure to support the second floor at access road side define the edge of this pebble filled secure play area of the school.

The idea of spaces that ‘flow on’ softens the rigidity of this fairly strict efficient double height circulation spine. Classrooms, Labs, Staff-rooms, Toy room, Computer room are laid out in a linear progression along the length of the site connecting the front verandah to rear corridor through the underside of central staircase.

As each floor is built set back from the one below, the whole school is visible from one end to the other. This enables the students to interact freely in common areas. This triple height verandah corridor on lagoon side is the spine of the building providing visual links between each level. It provides a sense of spaciousness in contrast to the tight constraints of the site as well as allowing access to extended views of the playground and lagoon.

In contrast to other typical government schools the steel upright handrails, are designed to contribute to the transparency of the spaces towards the lagoon. The Classrooms, while being compact, gain actual and perceived space from the triple height verandah corridor, via the use of weld mesh timber framed door windows.

The visual ensemble from the lagoon is softer and more understated, interspersed by the occurrence of monumental tapering columns at every 25 feet interval. This continuous spine, steps down several tiers, following the raised podium, defining distinct seating areas in front of the play areas of the school. The building has simple cross circulation patterns intersecting on the longitudinal circulation spine. Main focus of space in this school is on outdoor play areas.

Space is ordered and functional composed within the classrooms and verandahs of the building to serve the schools needs. Planning has simplicity in composition, spatial sequencing and either enclosure or transparency depending on requirements. Each space is located to best suit its function and each element is designed to provide some environmental advantage. The focus was to enhance the qualities of interaction of the building with its site and environment and to provide a sympathetic response to the existing built forms of the area.

The school is roofed by one single overpowering lean to roof. Different levels of the verandah corridor provide large outdoor areas protected from the elements, by the large overhanging Calicut tile roof. This simple mono pitched roof gives the school a distinctive character, and open up the interiors to the lagoon view. Resultant raked ceiling exposes the underside of the Calicut tile roof to the corridor verandahs of the school.

A mixture of Saffron and White walls and Grey cement based paint finished column and beams were chosen as the colours for the school to reflect the common colour schemes of the public schools of the area.

An external cantilevering staircase is incorporated into the road side, giving access to the indoor multi purpose assembly hall located in the second floor, which can accommodate all the kids of the school.

Particular attention was given to the selection of materials to be used, finishes and detailing to ensure a low maintenance, long-lasting outcome consistent with the clients brief and budget. The Architect’s approach of, fare faced concrete soffits, powertrovelled concrete floors, gutter less roofs, and pebble filled storm water drains, have not only added character to the building, but also have provided very effective solutions. 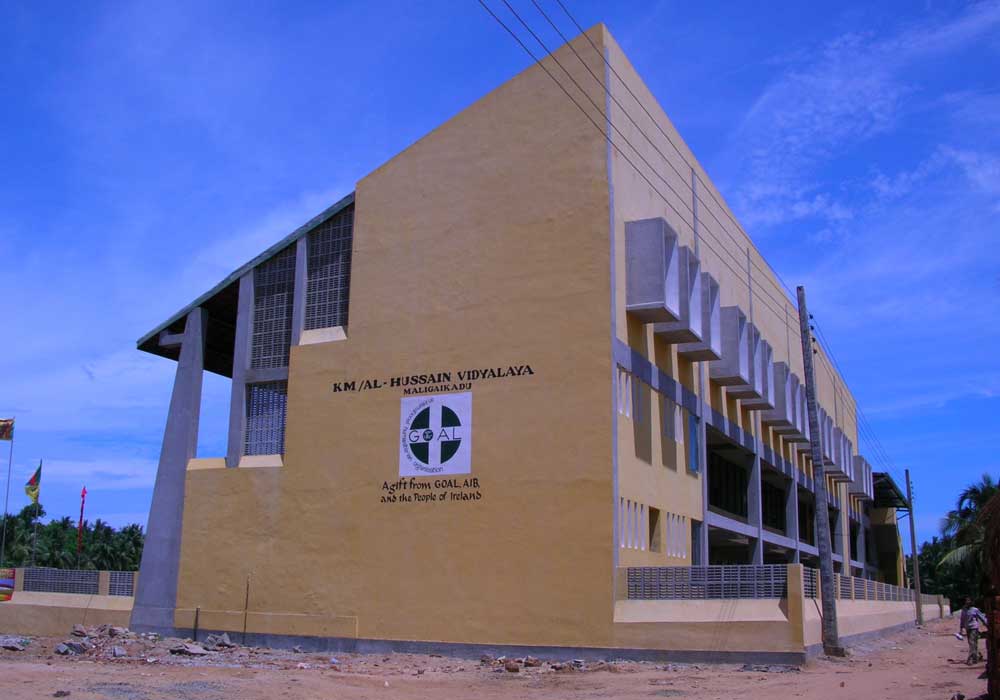 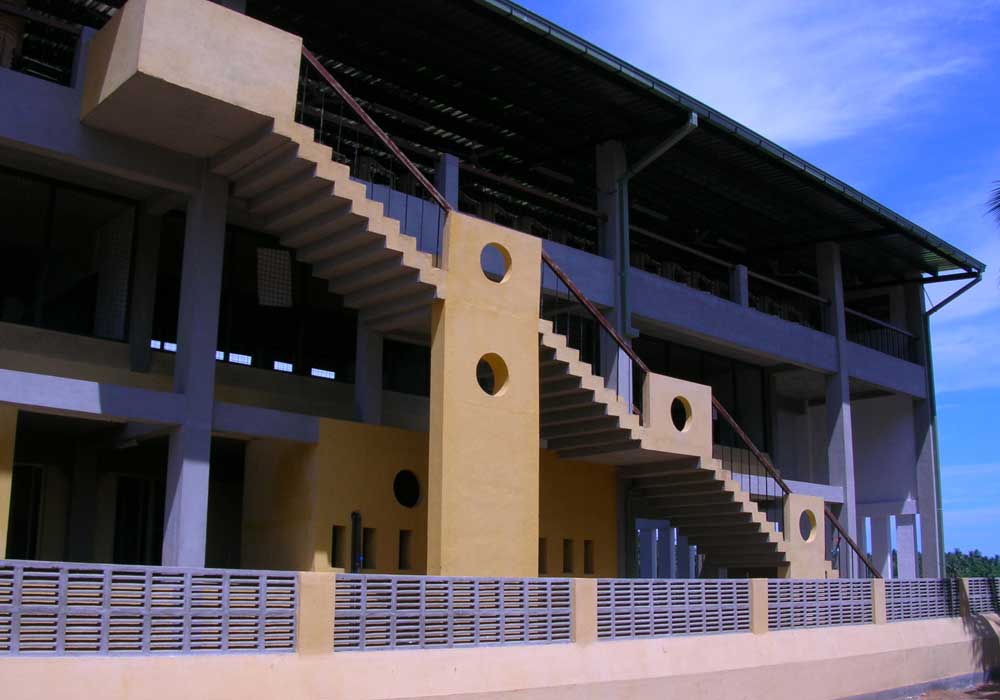 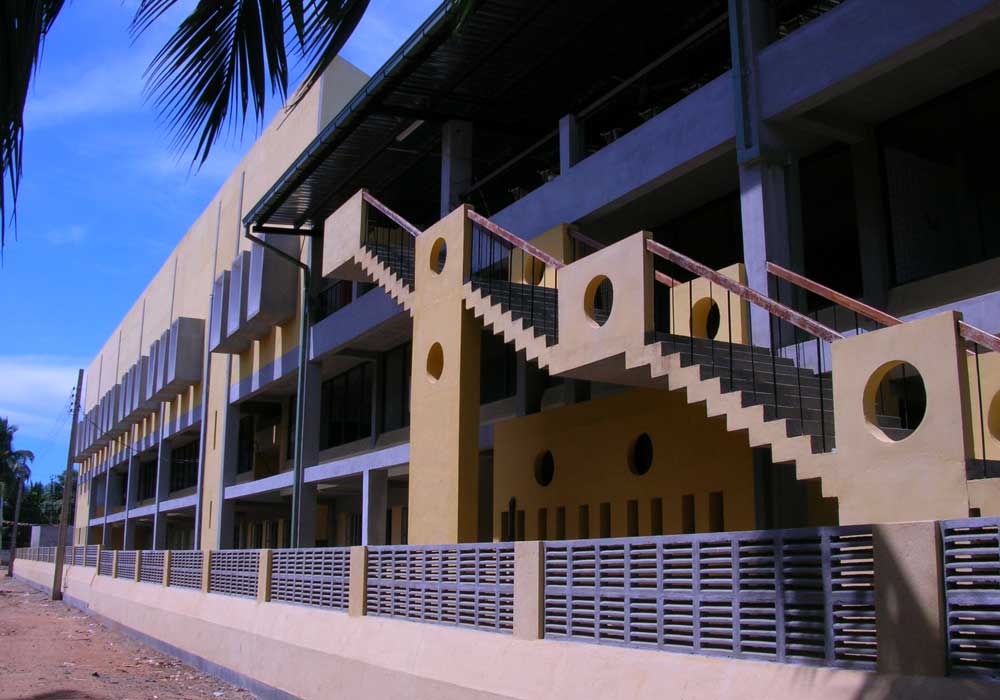 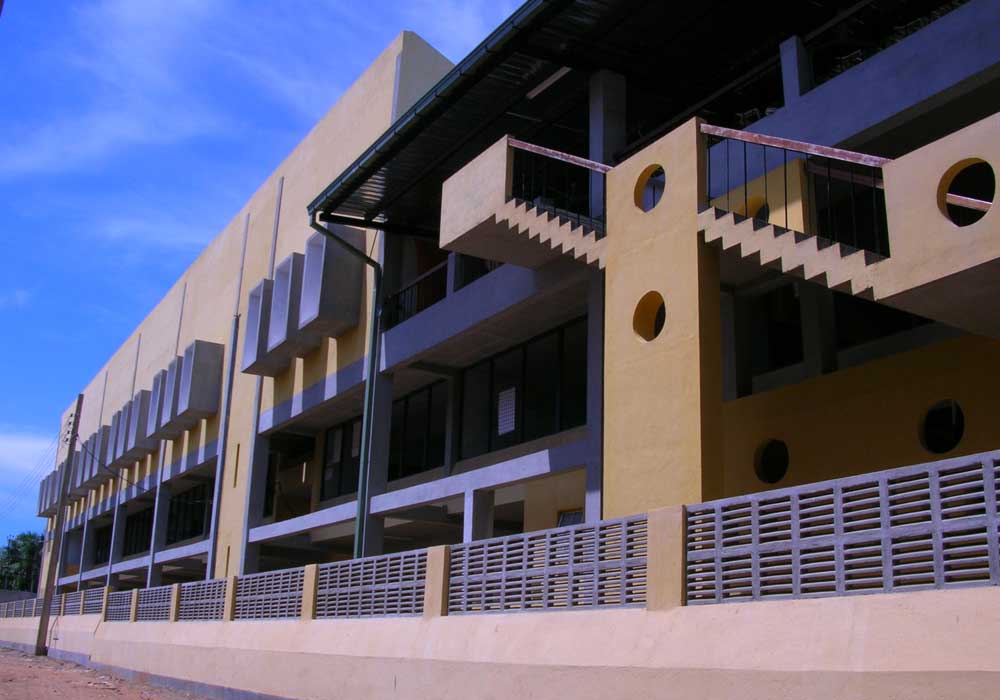 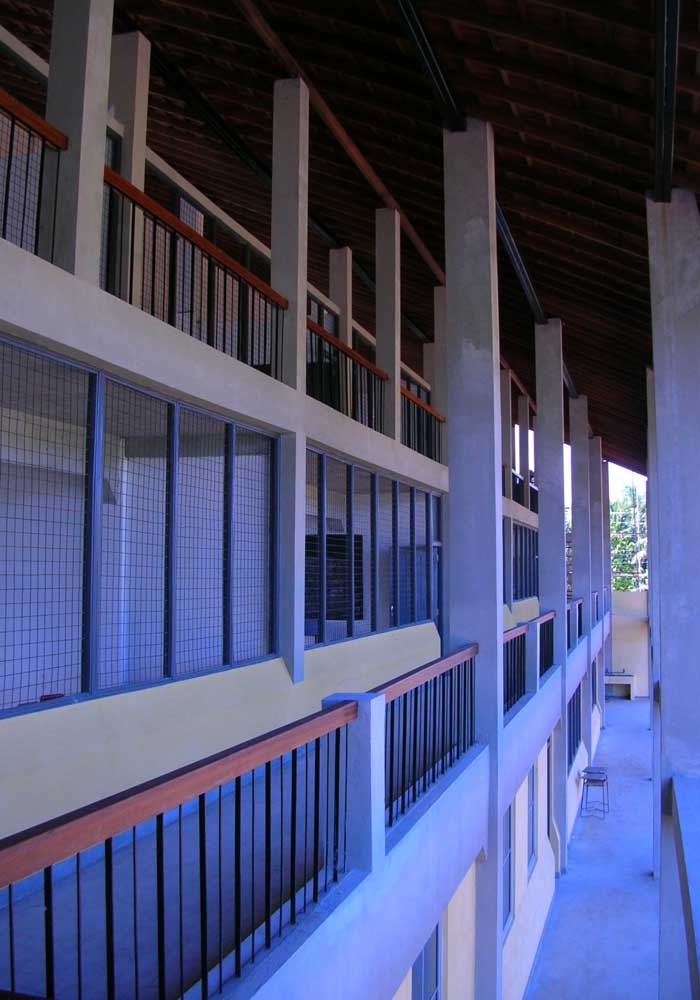 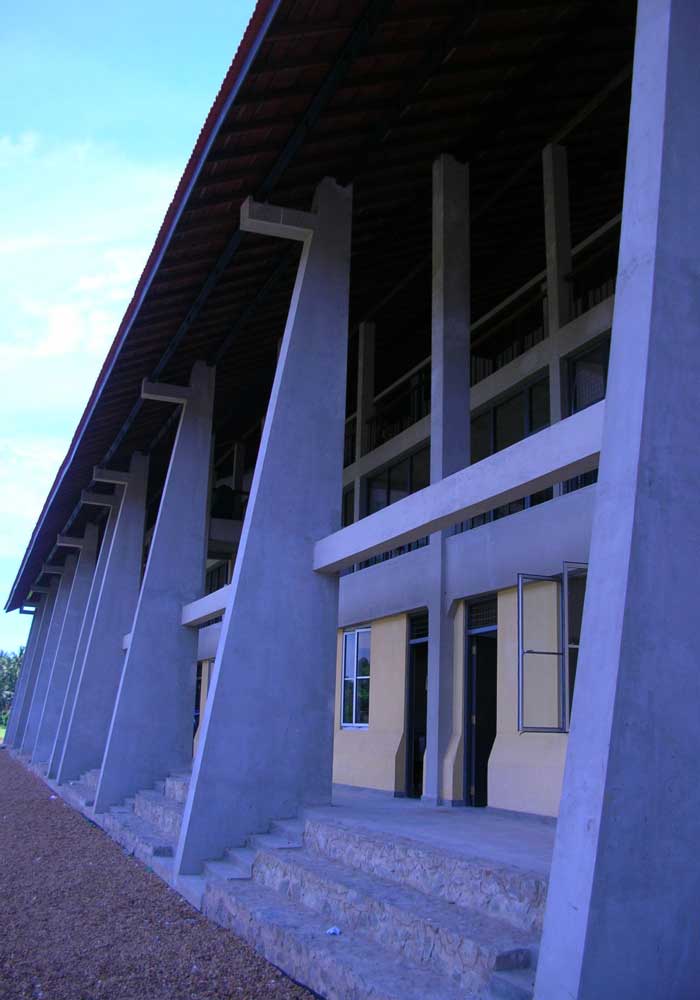 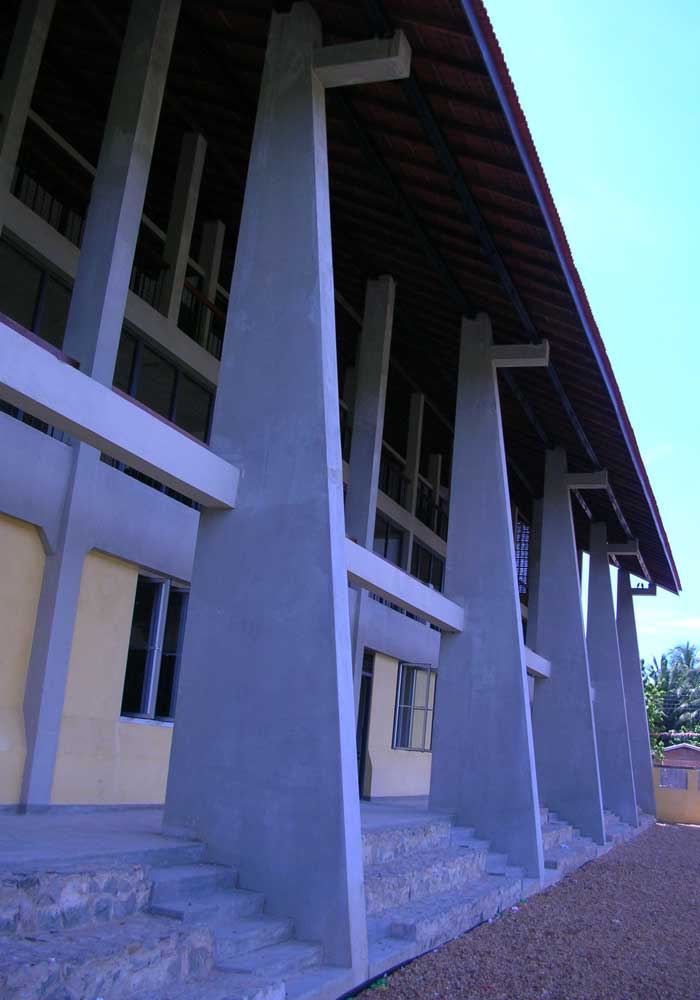 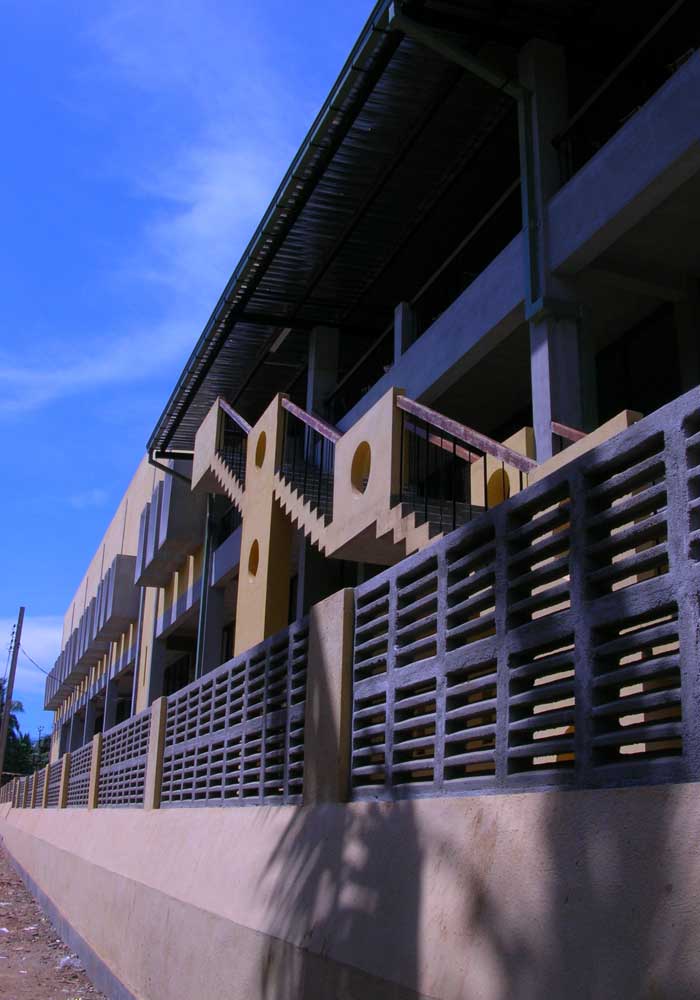 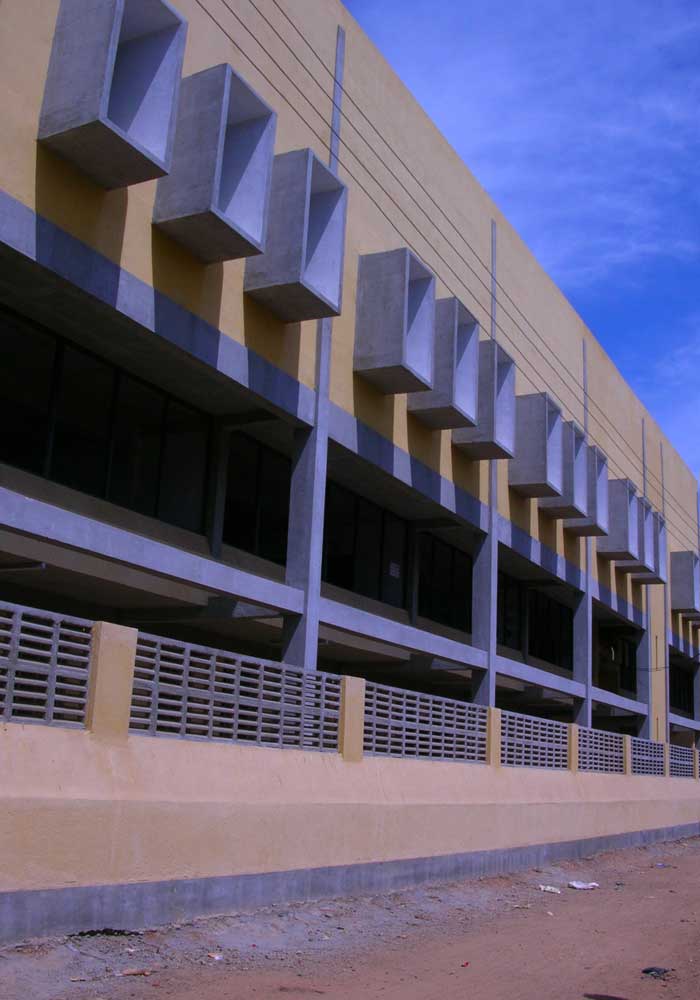 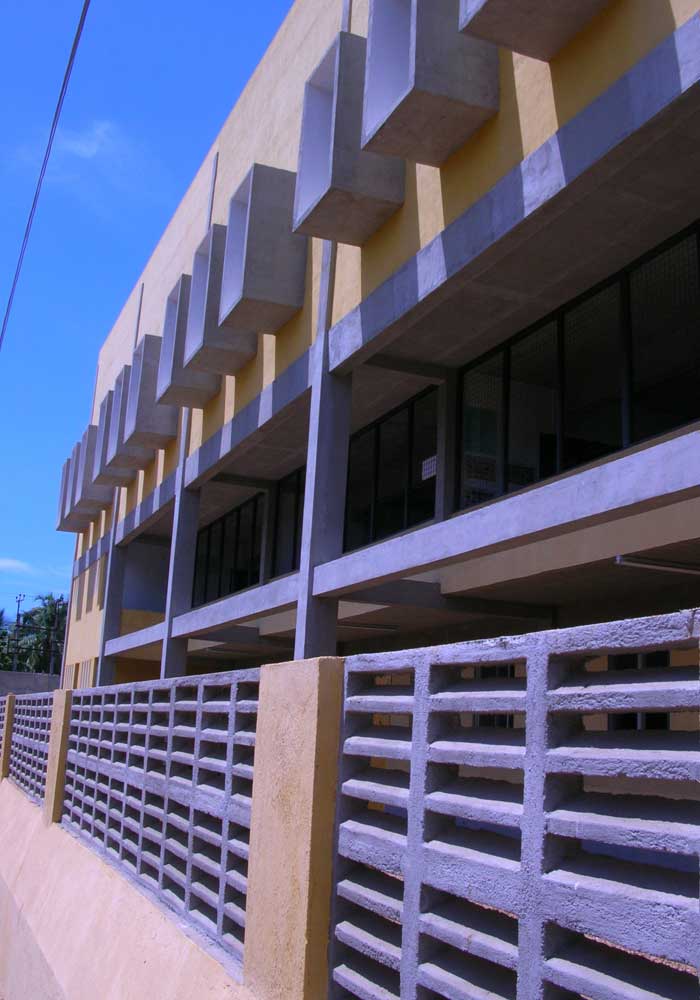 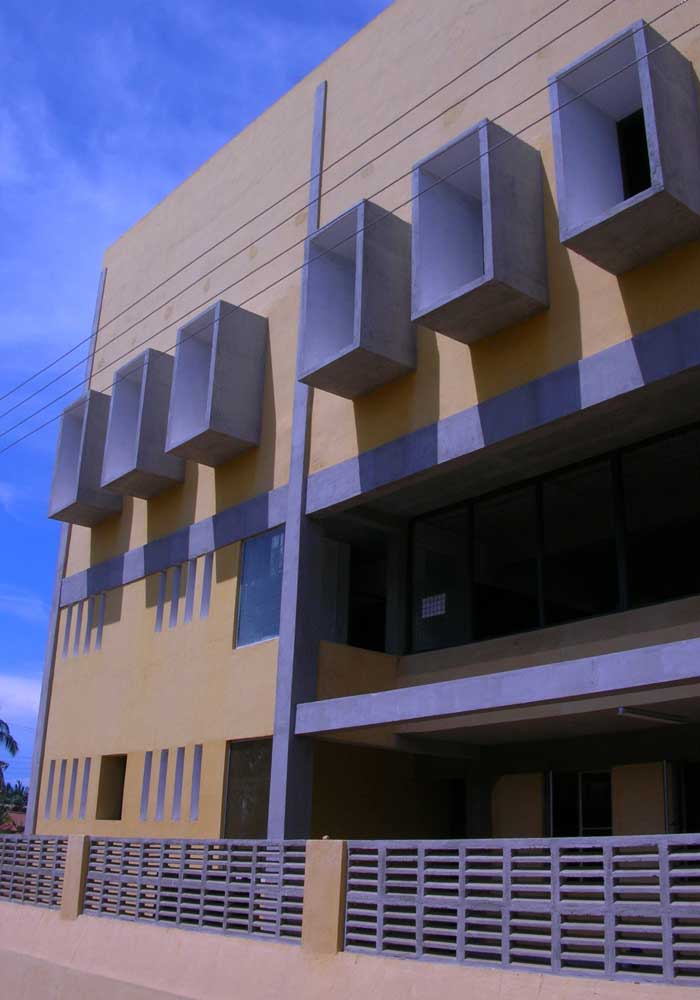 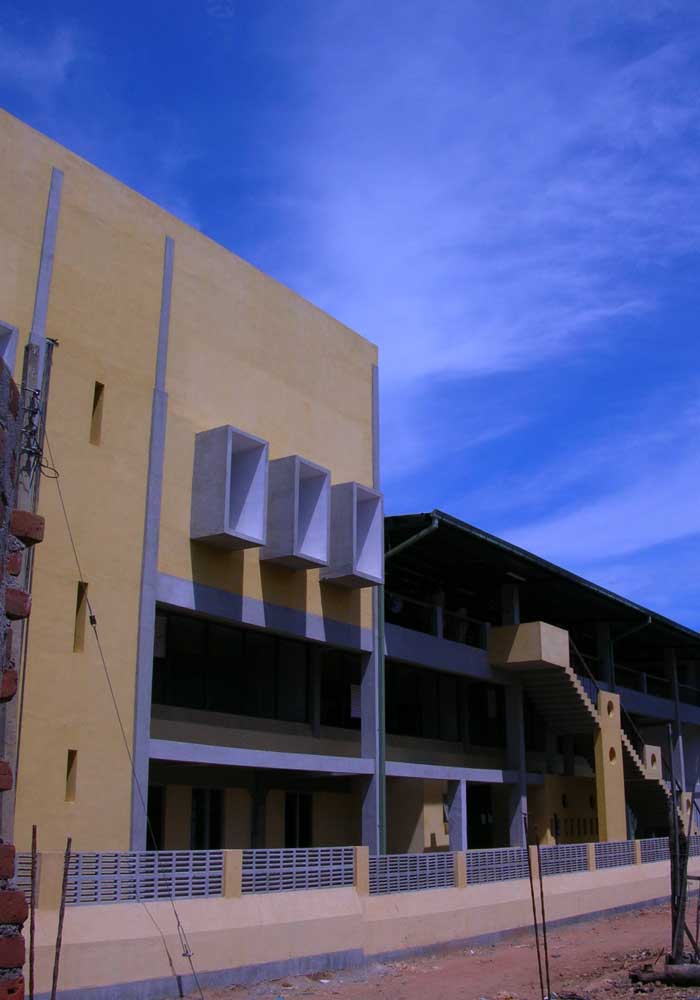 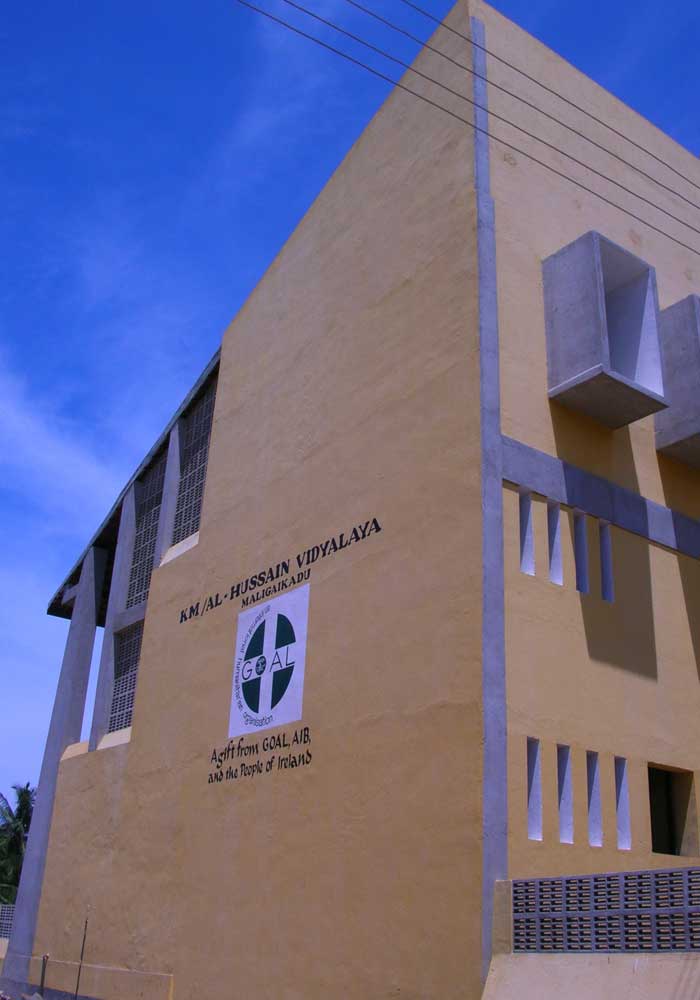 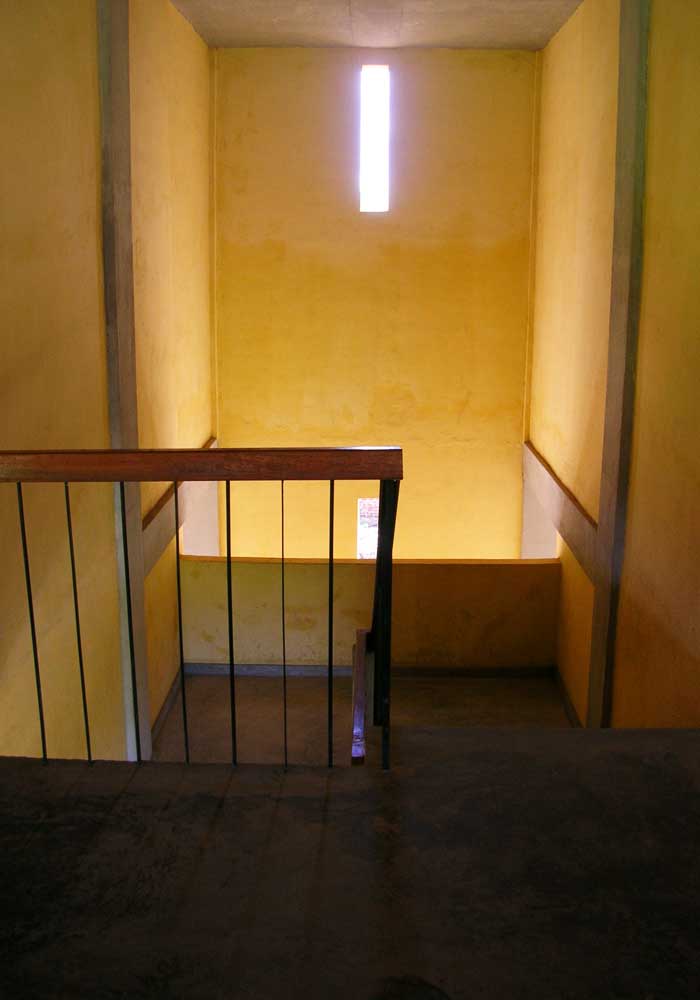 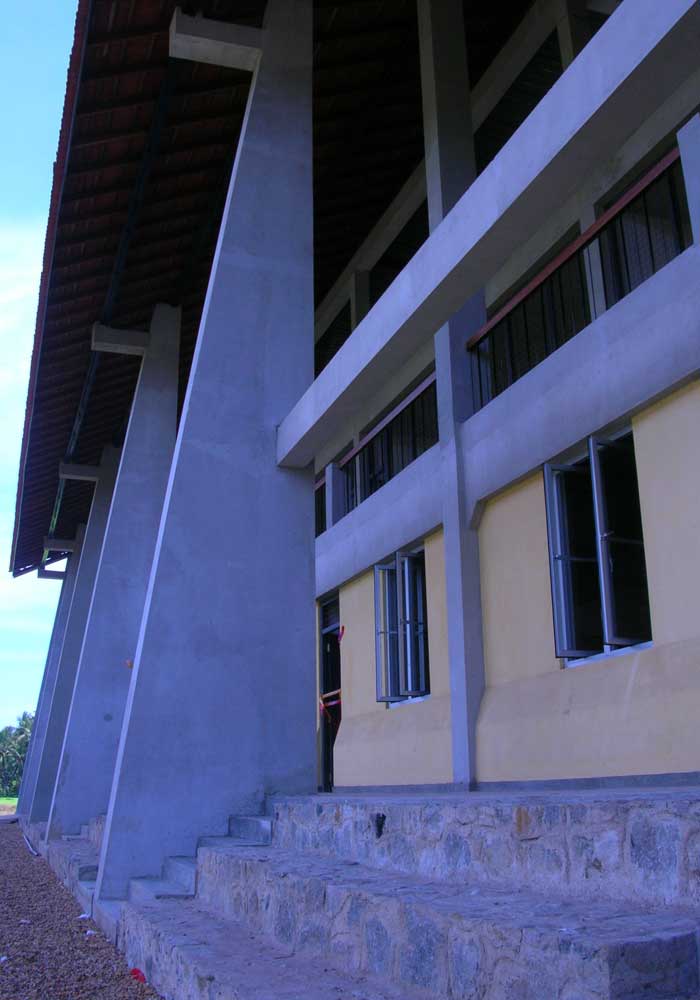