Doctor practicing in a regional government hospital contacted the Architects to design a house for a family of four which included writer wife and two school going children. They have lived in rural areas previously and were reluctantly forced to move close to Sri Lankan capitol city of Colombo suburbs due to parents searching for the best possible educational facilities available to their children. However, they deeply missed the rural surroundings they were accustomed to during their early childhoods. Land selected to build their home was a trapezium shaped sloping site in the Colombo suburb of Nugegoda. Shape and the Slope of the Land was a challenge for the architects, who had to contend with a strict street lines requirements of a Four roomed House in a relatively small plot of Land.

Trapezium shaped 202 square meter small land was selected to construct a house for a Doctor and his family in Colombo suburb of Nugegoda on a sloping site. Originally a larger parcel of land but subdivided and sold in two portions with a side road accessing another land at rear of the site. It was a pleasant neighborhood with similar sized land plots with mostly two-storey houses built in all other plots with the two plots ear marked for new houses to be built.

Main material used for the construction of this house is cement bricks giving the house a certain monochromatic appearance. In order to economize on the cost plaster & paint was deleted from the scope of works and exposed ‘fair faced’ cement brick walls with 1/2″ recessed grooves were used to construct the house external envelop and interior partition walls. As a counterpoint to the ‘brutal’ look of the cement grey brick walls upper floor Lobby Floor & Catwalk Floor was constructed out of Malaysian Balaw Timber Deck . Aluminium framed glazed Windows were also used in order for the house to be cost effective.

Residence was designed taking into consideration site slope and the trapezium shape of the house with a terraced front garden and a single level rear garden running the length of the house. Using the permission to cantilever the staircase towards the building line by one meter, entrance to the residence was positioned under the overhanging staircase landing. Exposed ‘fair-faced’ cement bricks were extensively used in the house to give ‘character’ and a certain textured tactile quality to the house exterior and interior. Taking a cue from the trapezium shaped plot of land, triangular cantilevered windows were introduced to the road side of the house with openable glass louvers, giving a certain irregular ‘informal’ quality to the front facade of the house.  Timber Decks were introduced to the upper floor on either side of the double height living room, to ‘soften’ the hard and sometimes ‘brutal’ interiors dominated by the exposed cement brick walls. Dark Grey colored aluminum framed glazed windows were used to ‘merge’ with the grey exposed brick walls. Roof slope was designed to follow the road contours in this steeply sloping access road. The simple mono pitched single slope zinc aluminium roof was conceived to give simplicity to the house in otherwise stepped front facade due to trapezium shaped difficult plot shape.

Due to the trapezium shape of the land and the street line applicable along the access road made it difficult to accommodate the request of the client to build a two-storey, four bedroom house in this relatively small plot of land. saving as much land for Front & rear gardens listed high on the design agenda and a relatively large triangular garden was allocated to the only ground floor bedroom at split level due to existing site slope. Occupants of the only ground floor room can directly walk out into the triangular garden located at a high elevation from the rest of the front lawn. A rear garden running the length of the house was also accommodated in addition to the double height in the center of the house visually and physically connecting the two levels of the house. Due to the restrictive budget available, plaster & paint items from the Bill of quantity was deleted substituting with exposed cement brick walls with 1/2″ recessed grooves.

Conventional Sri Lankan houses are mostly built with clay bricks and finished with cement plaster and a coat of paint. Clients wanted a different approach to their house and architects selected recently introduced cement bricks for the construction of the house and attempted to use as exposed cement brick construction with 1/2″ recessed grooves. ‘Texture’ & ‘Character’  of the house was to be derived from this use of exposed bricks giving the house a certain monochromatic black grey and white neutral background. Upper Floor Timber Decks were introduced to soften the somewhat ‘brutal’ outlook of cement bricks as a counterpoint and to soften the interiors. Use of timber furniture was further expected to soften the outlook of the interiors. Dark Grey Aluminium framed glazed windows were used to merge with the cement brick walls on the exterior envelop. However, Bedroom doors and main door of the house was done in Plywood & Timber respectively to ‘soften’ the appearance of the interiors.

As the owners were in possession of two vehicles one vehicle park was allocated undercover parking facing the main access road while another vehicular access gate was positioned to take access for the second vehicle from side road entrance.

Trapezium shaped 202 square meter small land was selected to construct a house for a Doctor and his family in Colombo suburb of Nugegoda on a sloping site. Originally a larger parcel of land but subdivided and sold in two portions with a side road accessing another land at rear of the site. It was a pleasant neighborhood with similar sized land plots with mostly two-storied houses built in all other plots with the recently sub divided two plots ear marked for new houses to be designed and built.

Significance of the Project

This house is an attempt to construct a house using cement bricks, a material newly introduced to the Sri Lankan market which was expected to give a unique appearance to the house and a ‘counterpoint’  in otherwise differently colored houses lining the particular suburb seeking attention. It was intended to be a discreet ‘invisible’ house with a neutral background, merging effortlessly into the urban-scape. It was also intended to be a house full of a ‘unique character’ with a textured tactile quality due to the use of uncommonly used exposed cement bricks with recessed grooves. The use of mono pitched single sloping zinc aluminium roof following the road contours and employment of double height space was meant to visually and physically link the two levels of this small house. Planting of eight numbers root-ball replanted fruit bearing trees in both front and rear gardens of the house was meant to induce urban wildlife into the surroundings of the house in otherwise highly built up Colombo suburb of Nugegoda. Use of cantilevered staircase under which a visitor to the house access the main door of the house,  and the use of triangular cantilevered glass louver windows mimicking the trapezium shaped land are special features of the house. Incorporation of cantilevering triangular windows have given a certain ‘machine like’ external appearance to the house in keeping with the famous architectural idiom ‘House is a machine to live in’ 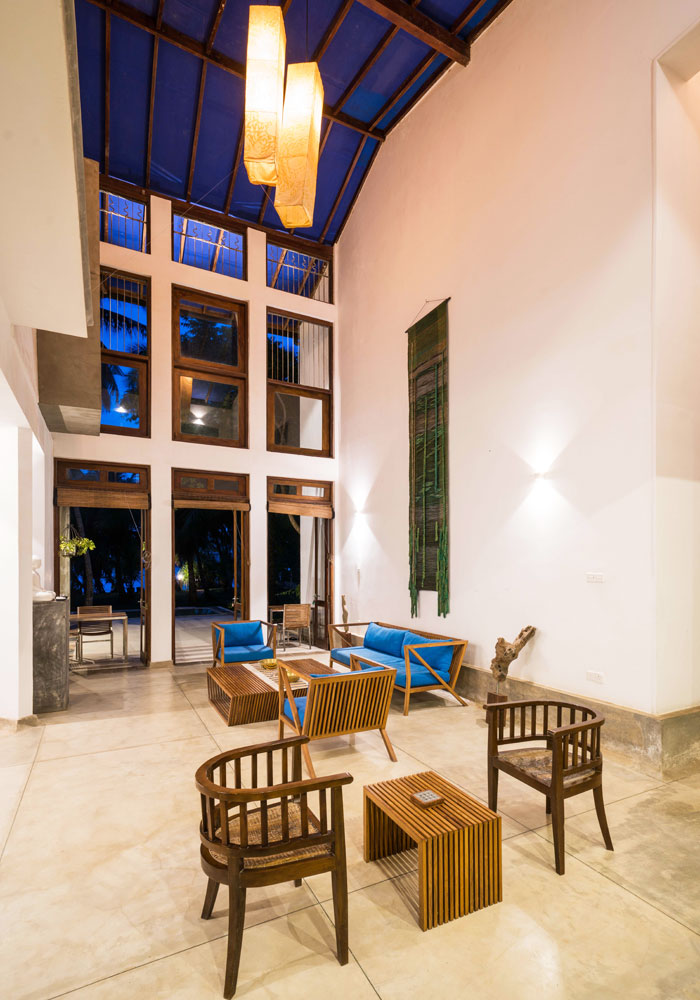 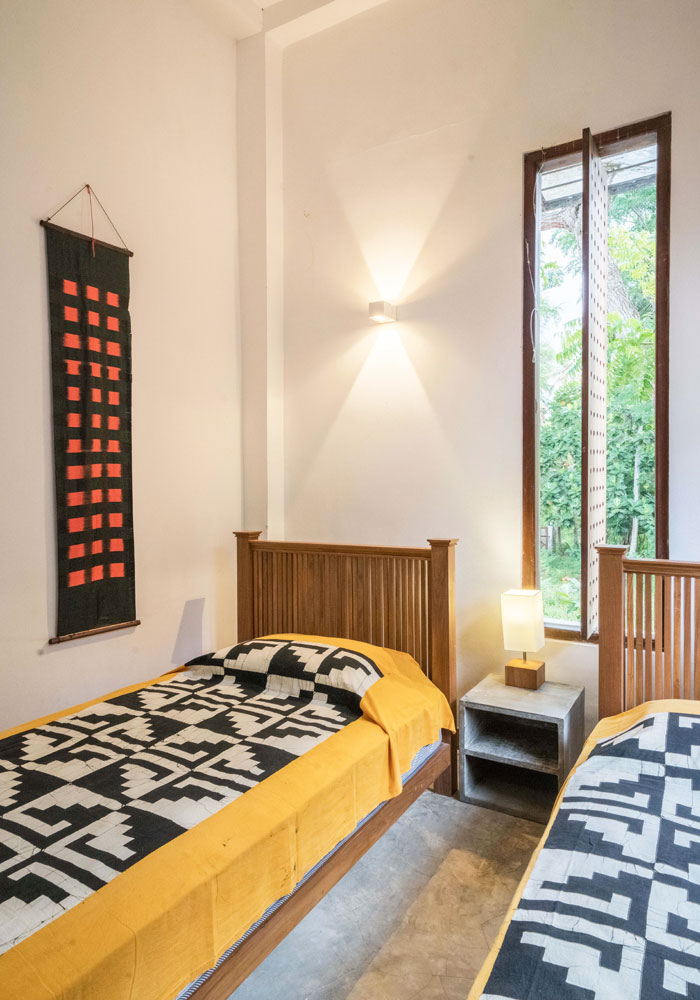 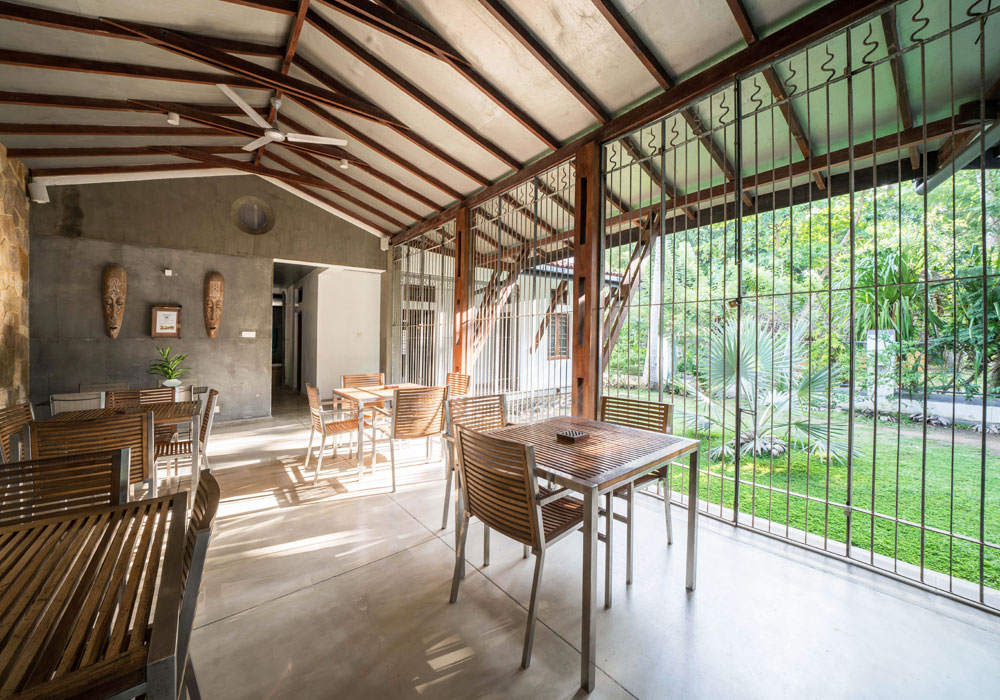 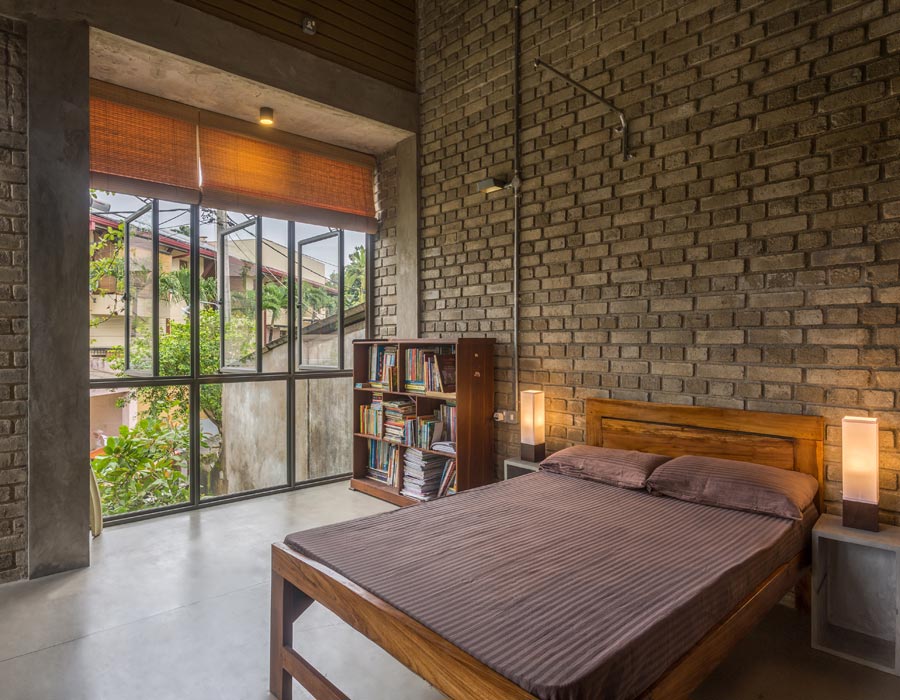 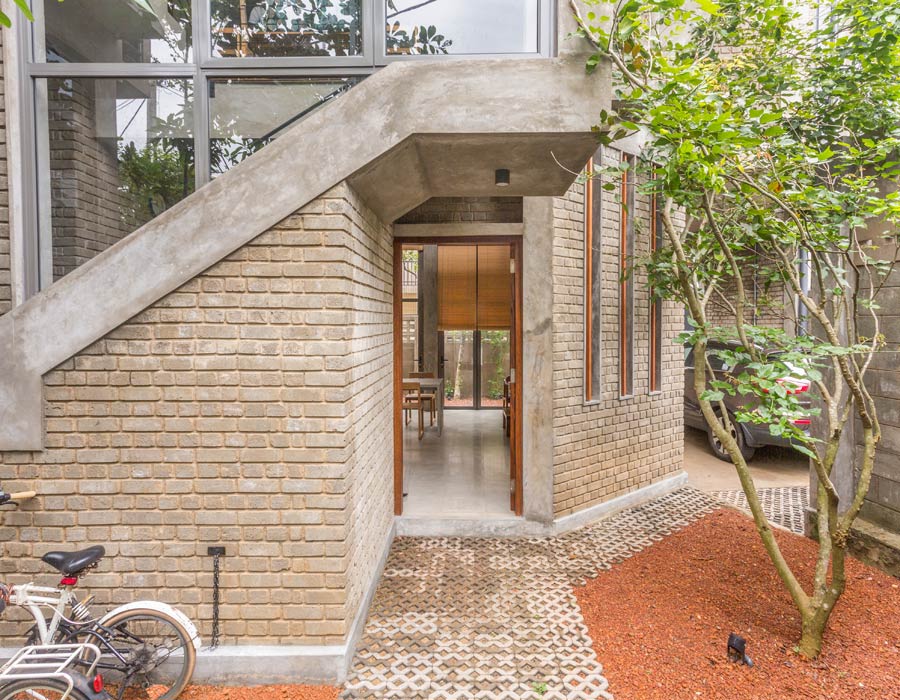 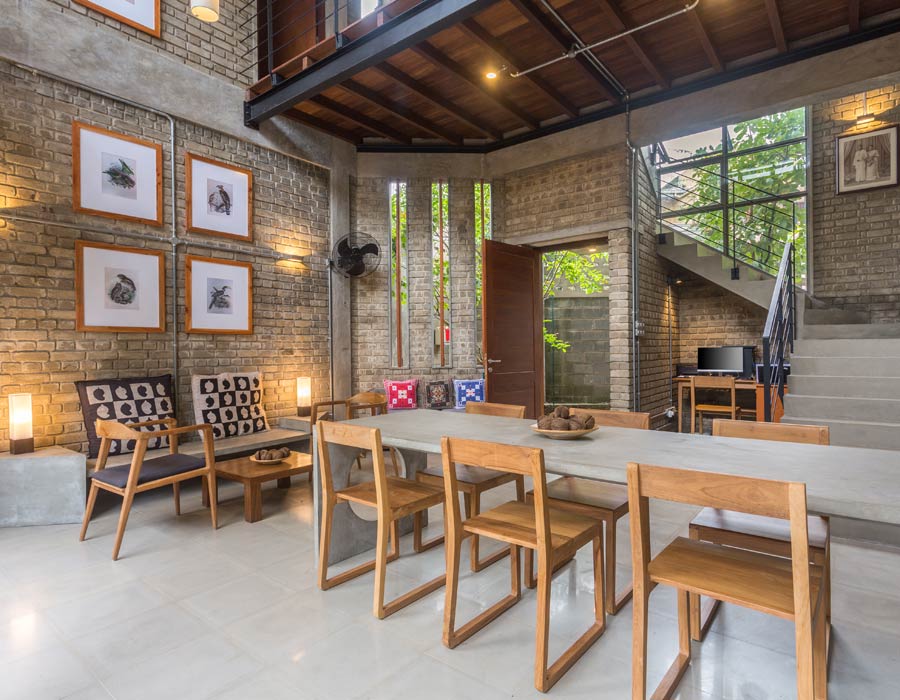 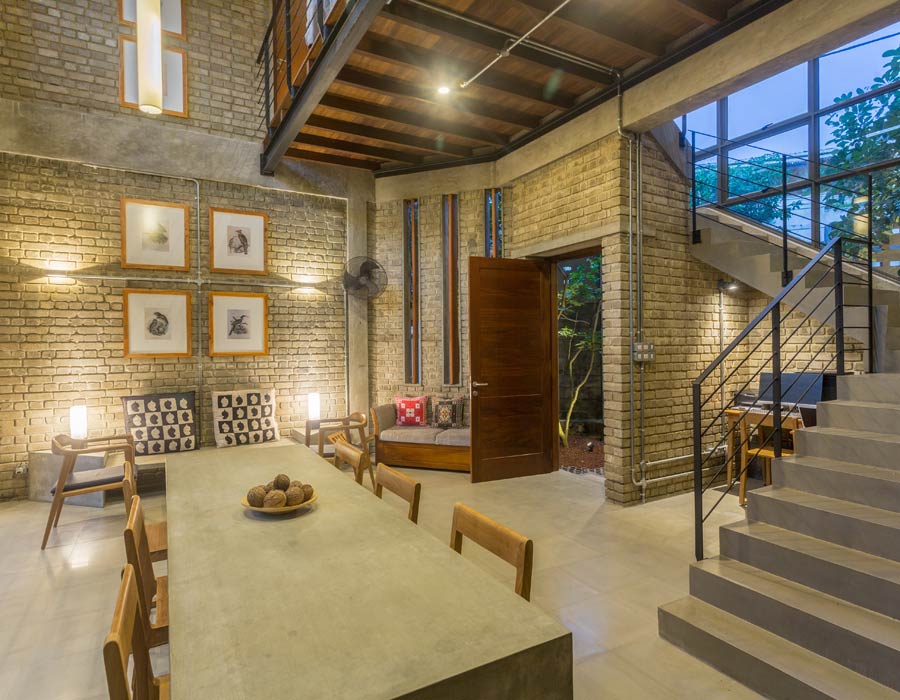 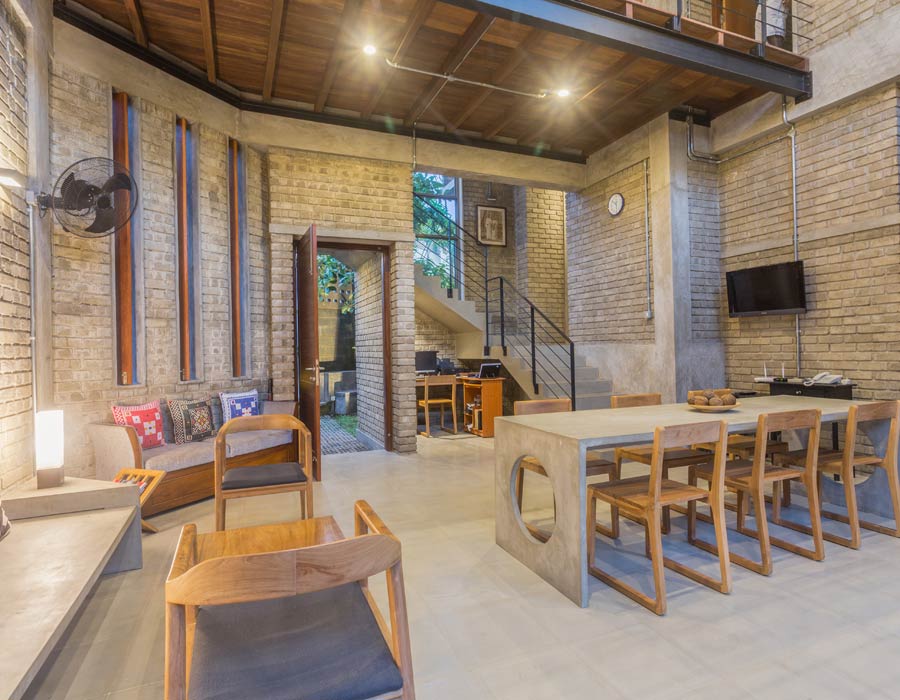 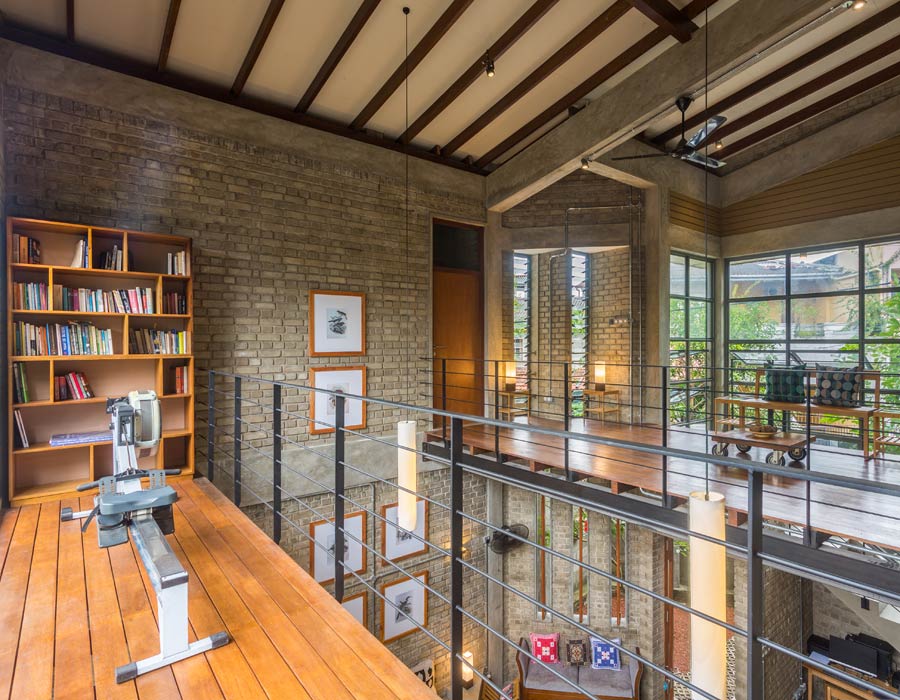 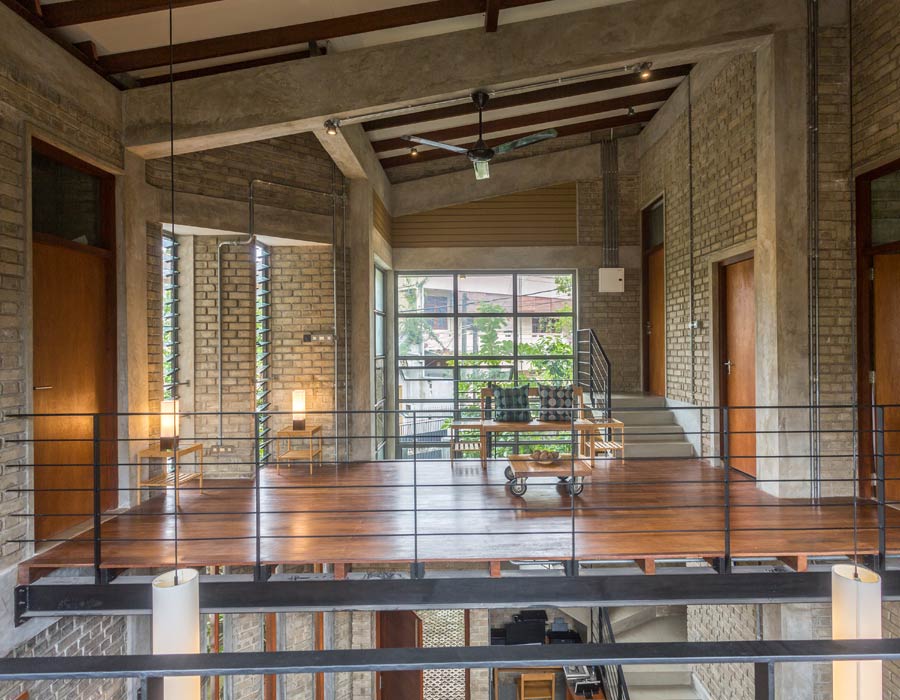 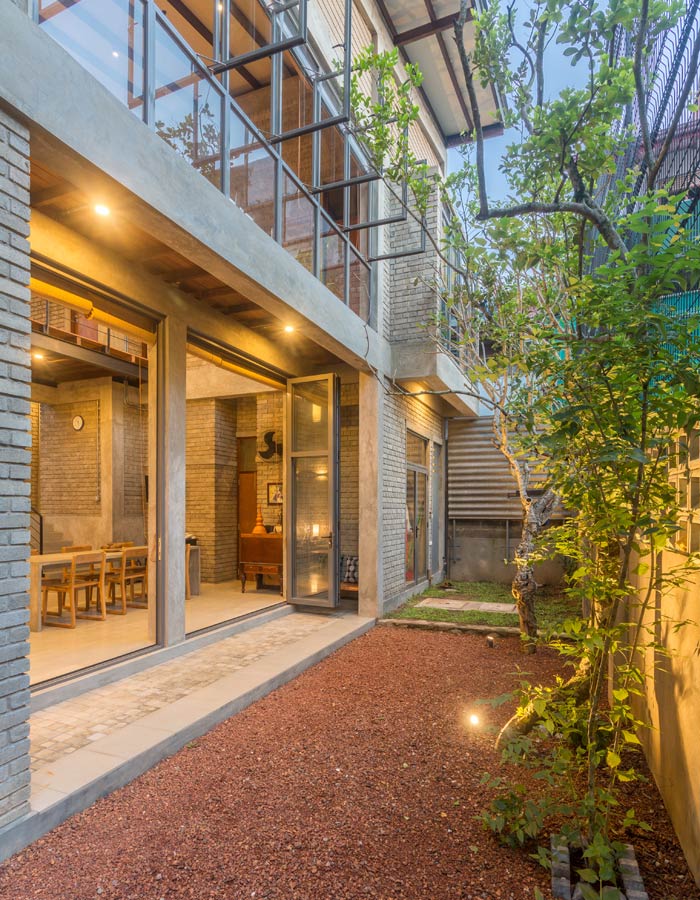 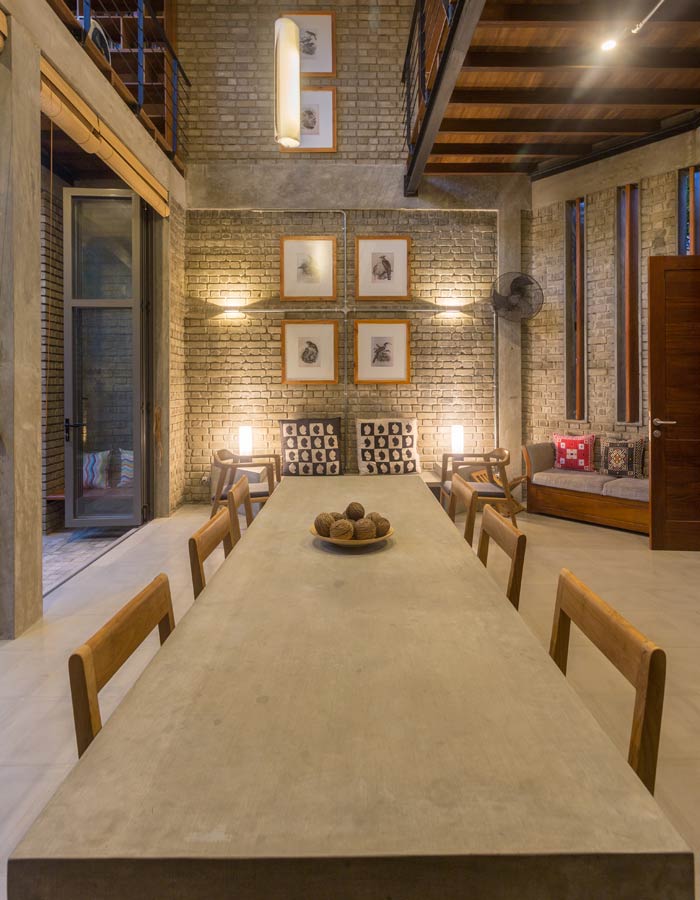 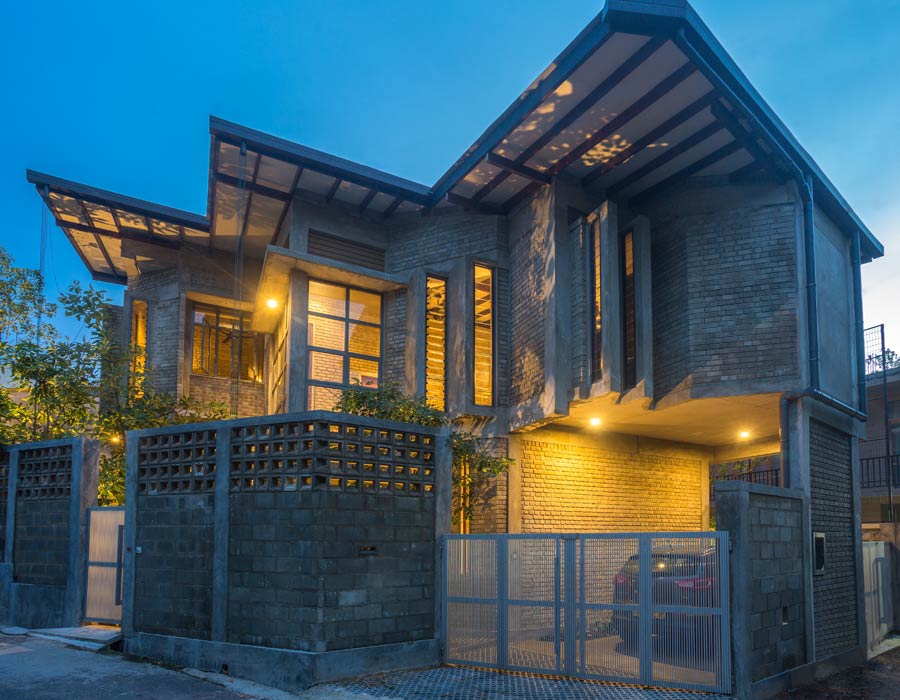