A small coconut grove measuring approximately half an acre (80 Perches) overlooking a paddy field, inherited by the owner, was selected to build a house in Sub Urban Colombo. There were existing houses on the Western edge of the property with medium built up density but the Eastern side was full of mature trees including coconut trees, while Northern side overlooked a beautiful paddy field. In addition there were substantial numbers of existing mature trees present at the site boundaries, giving it almost a ‘semi wilderness’. Challenges for the architects were to build a four bedroomed house overlooking this wonderful future garden saving many existing trees as possible.

At the inception of the project it was conceptualized that this residence should be a long ‘thin’ one only ‘one room’ thick, so that all rooms will have a share of the ‘view’ of the ‘garden’ giving a feeling of living in a coconut estate. It also enabled to save, as much as possible, the existing mature trees at the site, which is a rare occurrence in suburban Colombo, reeling under the pressure of the migration of middle classes to East of Colombo resulting in medium density built up corridors along roads.

East of Colombo has felt this pressure strongly, especially after the then Govt. in Nineteen Eighties decided to shift the administrative capitol to Sri Jayawardanepura  Kotte, creating an Eastward thrust to the Colombo urban sprawl, which was previously limited to Northwards  and South wards of Colombo. This Urban sprawl amoeba started absorbing the yet untouched agricultural lands, after the completion of the Sri Lanka’s Parliament building in Kotte.  This gradual migration of urban middle classes to the East of Colombo resulted in unplanned sub division of larger agricultural land plots into smaller plot sizes in a haphazard way. The Site this house is built is one land which managed to escape this phenomenon.

The House is built on reinforced concrete column and beam structure with part of the upper level out of ‘Teak’ timber deck.  Significant feature of the house is its mono pitched single sloping roof, protecting the thin long house section in one single sweep with wide overhangs. Projecting from the Upper Level and overlooking the Garden are outdoor balconies protected by a reinforced concrete slab located below the above mentioned wide overhanging mono pitched roof.

The House is built in reinforced concrete column beam structural skeleton on rubble foundations, with plastered brick masonry infill walls. All door windows are timber and timber framed fully or partially glazed depending on location.  Roof is mono pitched corrugated cement board roofing sheets, opening out to the garden and paddy field views with generous eaves. This substantially sloping roof has wide projecting eaves in order to shed the monsoon rains. Ceiling is out of silver colour painted cement boards (mimicking ‘metallic’ ceilings) on exposed timber rafters. Exterior walls were painted with a special paint mix of rubberized glue and cement called cement handled wall finish, later hand cut using sand paper and sealed with a clear coat of sealer, so that the finished colour a gray with a greenish tint will ‘blend and merge’ with the surrounding vegetation. Internal finishes are inexpensive and hard wearing –polished cement on the lower level and local hardwood timber on the double height verandah. The more ‘modern’ materials such as glass and steel are used as a contrast to more traditional, cement grey walls with steel upright handrails providing protection to balcony ‘lookouts’ on ‘view’ side.

As the half acre land was full of mature trees, challenges for the architects were, how to save as many existing trees as possible. The result was the adaption of the one room thick rectangular ‘Thin Section’ facilitating minimum removal of existing trees and maximization of cross ventilation within the residence. In addition, the chosen orientation of the house is ideal because the long elevations face East and West and consequently the architect did not have to deal with direct sunlight in the evening, as Western façade was more solid compared to Eastern facade. However eastern façade was given additional sun and rain protection by way of a double height verandah creating an intermediate buffer zone between the outside and inside of the Long thin residence. Here the building section takes precedence over the plan as the generator of building form and the basis of design thinking. It successfully employs the principal of composing tropical houses from one room wide rectangular blocks.

There is duality in the house plan: the West facing elevation is relatively closed, with small window openings, whereas the Eastern & Northern façade is open with larger windows looking towards the Garden & Paddy Fields. The narrowness of the one room wide plan also helps in this respect; by opening windows on the East elevation, through drafts are encouraged. Coconut Trees form backdrops to almost every ‘view’ from balconies.

As the site was full of existing mature trees, the need to introduce new trees by way of root ball replanting was not necessary as existing trees as much as possible were saved. A shallow reflective Pond was added to the interior of the house as a landscape feature and to cool this non air conditioned house interior through evaporation of cool air. Exterior colours were carefully selected to merge with the surrounding greenery – “an ‘unfinished’ contemporary architecture that readily accepts a patina of age”.  The result is a dark alien presence of a house in the landscape in grey green cement, timber and glass. The house has a special relationship with nature. .

Nature in essence is beautiful. It is the fruit of wonderful associations between elements of the world. Architecture is also beautiful in essence, because it is the result of reflection followed by a construction which transforms or completes the environment, to offer humans an appropriate habitat, it procures them shade when the sun shines, shelters them from the rain, protect them from wind and cold, frames the views. Nature can be sublimated by architecture and architecture can be glorified by nature. Therefore nature and architecture appear to be insolubly linked, the structures enmeshed with its environment. The case in reference is a contemporary house suburban house which dissolve the barrier between inside and outside by merging with its surroundings. Not with-standing the use of modern technology it is very much in the spirit of a traditional dwelling. And that is the beauty of this abode; it is at one with and coexists with nature. 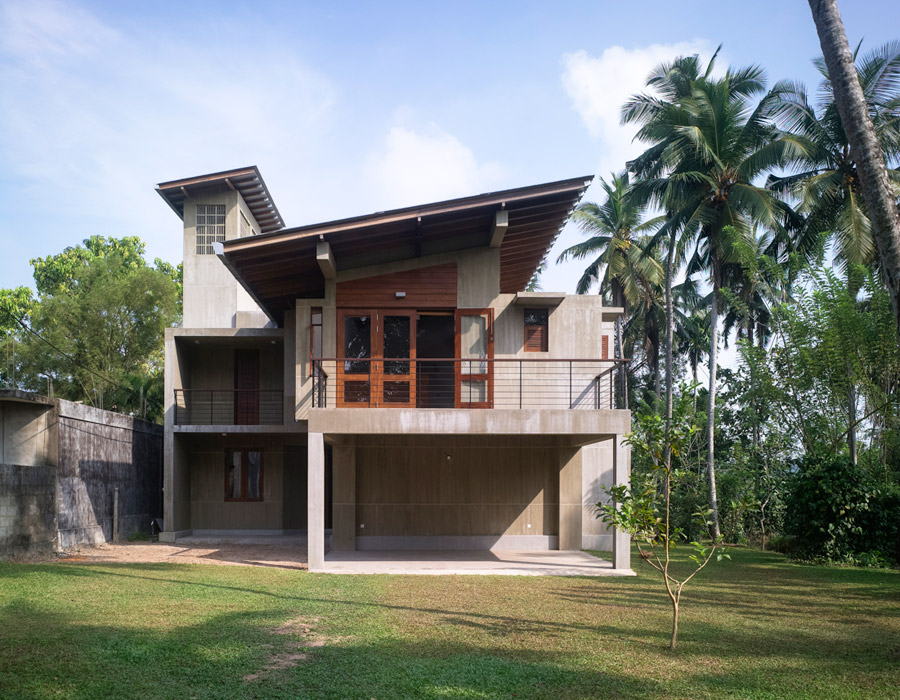 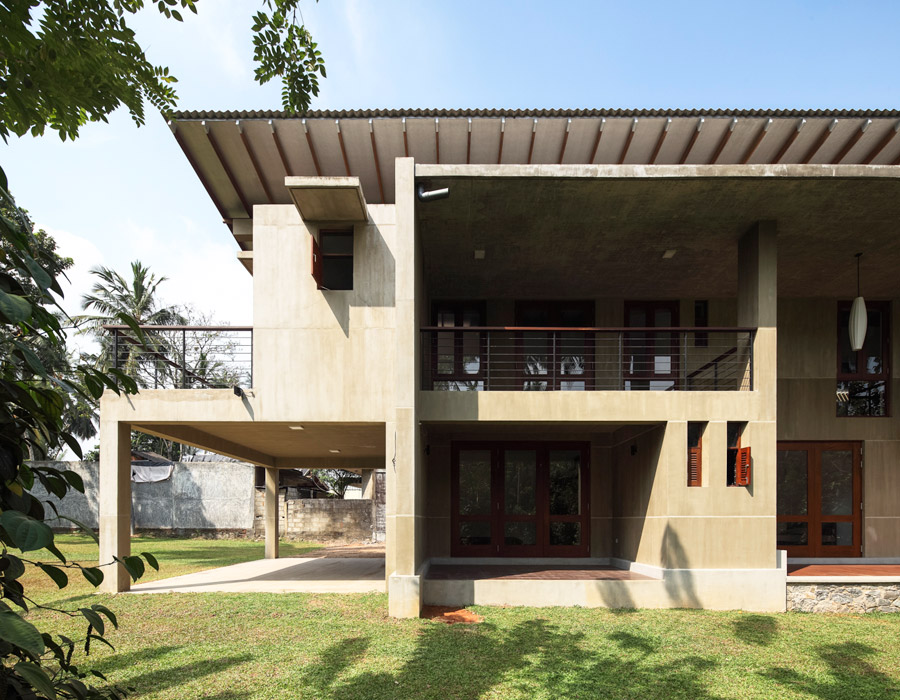 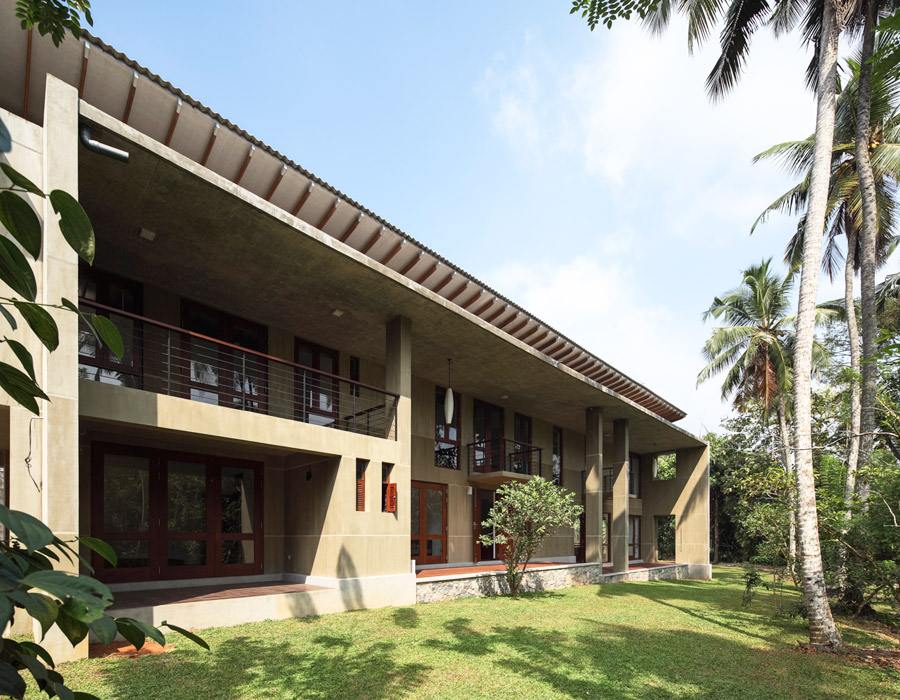 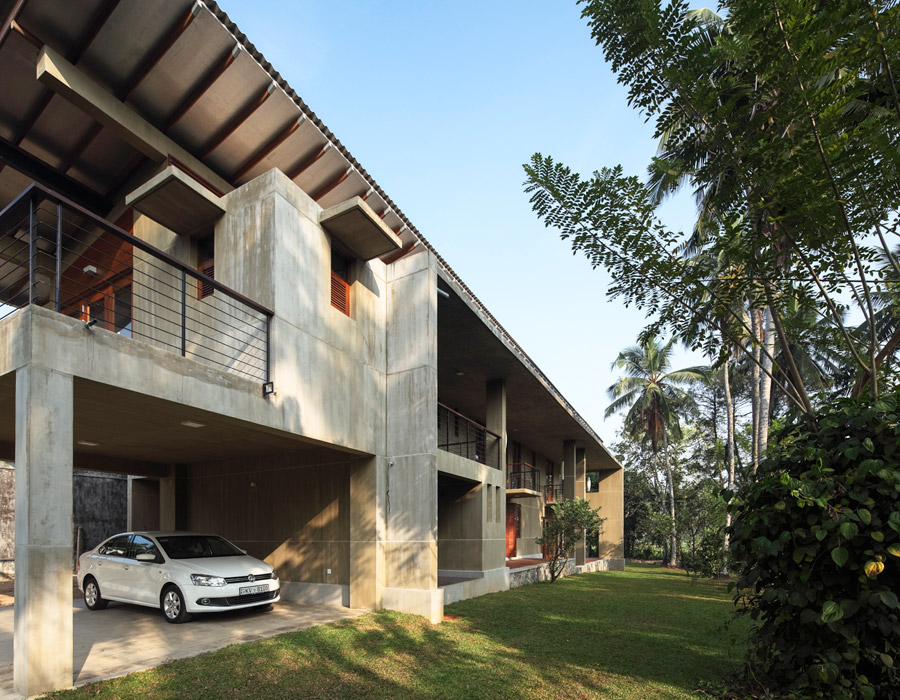 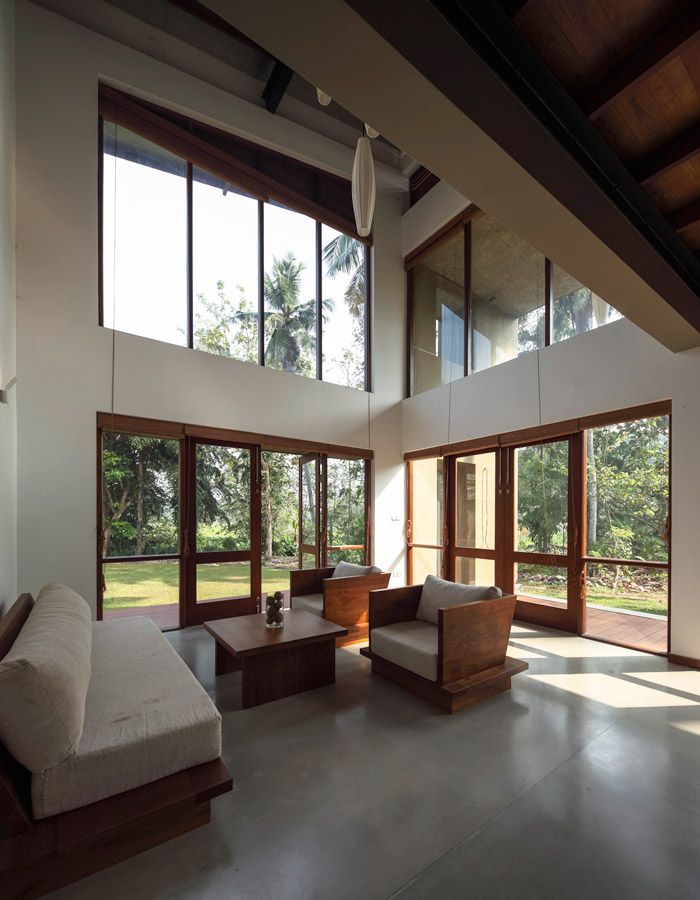 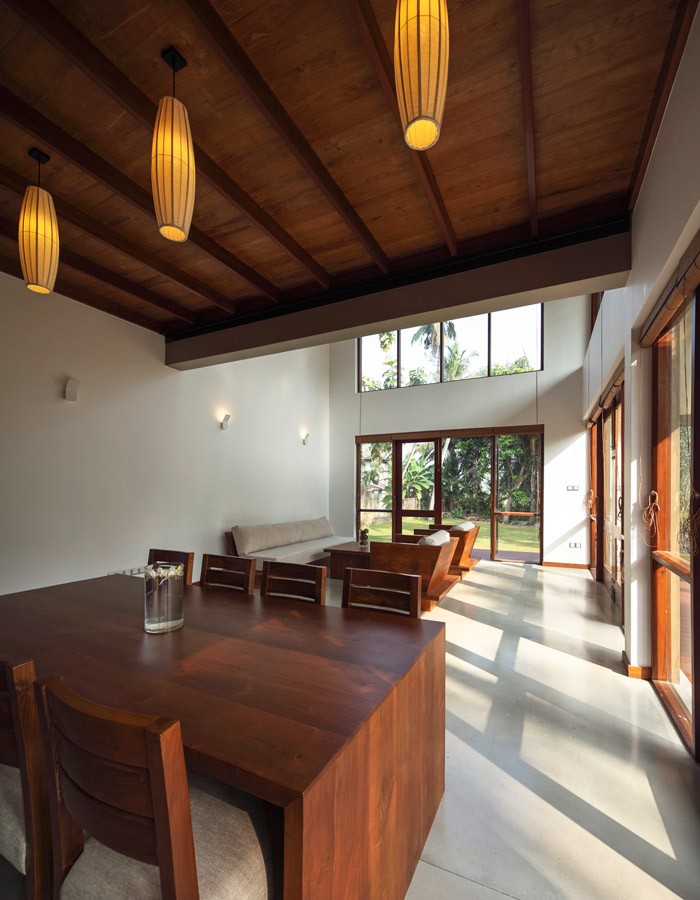 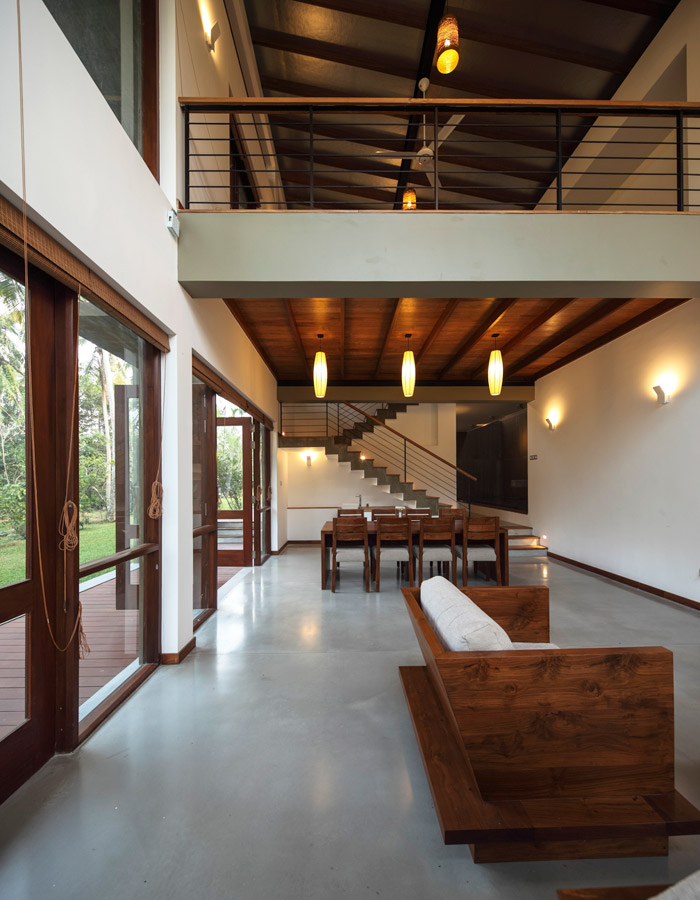 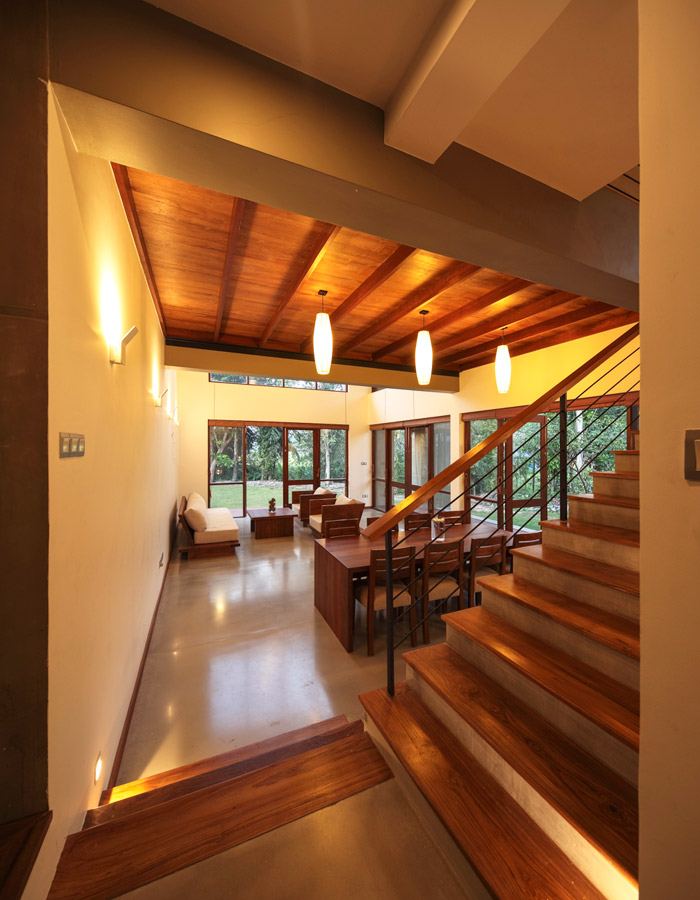 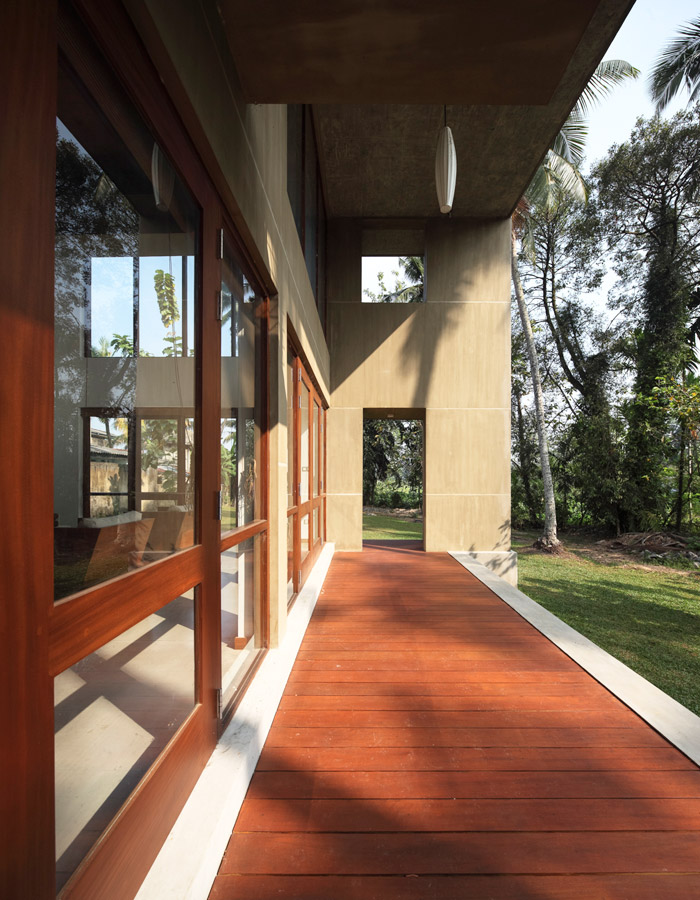 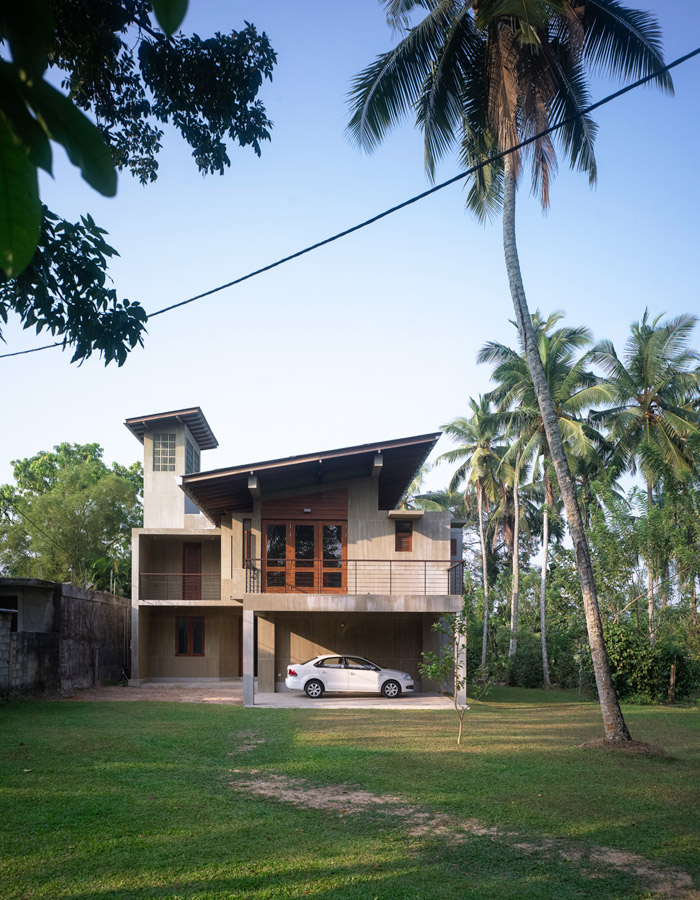 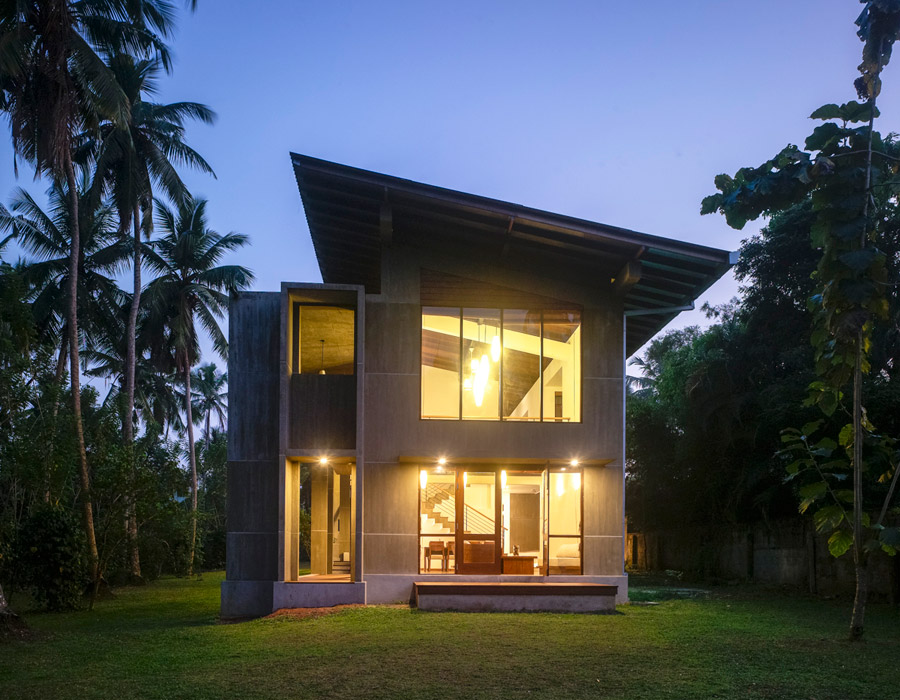