A Six (06) perch (150 square meter) rectangular block of land overlooking a paddy field was selected by a lady doctor nearing retirement, for her and her doctor husband to build a modest cost effective small compact residence to spend their retirement. Site was located at an end of a gently sloping road overlooking a panorama of paddy fields and distant trees in Colombo Suburb of Madiwela Road, Thalapathpitiya. As this was to be there second house budget available was minimal. Architects responded by designing a split level house with a butterfly roof with exposed brickwork exterior in a RCC concrete skeletal framework and a NERD cost effective slab system. Residence was designed as a split level house with living dining hall in ground floor and master bedroom in upper floor overlooking the paddy fields, while service areas like kitchen and  the car port were tucked on to the hill away from the paddy fields. House was given a butterfly roof to suite the sloping site. Limited palette of materials such as exposed brickwork for exterior, smooth cement rendered interior walls, titanium dioxide cement floors and black powder coated glazed aluminium windows were used in the house.

Cost effective materials were chosen as much as possible due to budget limitations. Exterior of the house was left with exposed brickwork while interior of public areas of the house was plastered in smooth cement plaster to avoid the need to paint and cut costs.  However the private areas were plastered and painted in white after a value engineering exercise, where cost saved in public areas of the house was channeled to the bedroom interior finishes to give bright airy spaces for the private domains of the house. Black powder coated glazed aluminium were used for windows while cost effective NERD slab system was used, saving about 30% of the cost of a normal reinforced slab, due to the ability to save the cost of the slab shuttering. High ceilings were used for the public areas of the house using the existing site slope and the resultant ‘split’ levels created through the ‘section’ of the house. A steeply sloping ‘butterfly’ roof section was used to collect water to a central RCC concrete gutter on top of the’ spine’ of the house- the staircase of the house- while water collected were directed to the floor through the ducts placed on either side of the staircase exterior. A house in the tropics is living in close proximity to the natural world and therefore should not destroy any substantial trees on the site. An existing Mango tree on the western edge of the house was retained to create a buffer from the hot tropical sun. Existing rock boulders were also retained in the garden as landscape elements. Garden proper was nominally landscaped while paddy fields were considered borrowed extended garden of the house.

The rapid growth of Colombo and the accompanying problems of increased density, traffic congestion and pollution have seen the proliferation of parallel phenomenon- second homes. When city dwellers have sufficient means to escape the frenetic pace of life in the city, they acquire a site some distance from the city to build a second home. Preferably the site will be surrounded by a lot of greenery, yet accessible, and although somewhat isolated not without basic services. For an architect, the design of an individual family dwelling is a demanding yet ultimately a rewarding task. Rarely will the designer have a close relationship with the end user. The most successful houses arises out of, a strong empathy between the client and the designer. this compatibility is of critical importance because a house is ‘ a social portrait’ of its owner. It is a combination above two factors that led to this unusual house with its unique cross section to emerge bordering a paddy field in suburban Madiwela, Thalapathpitiya. Clients although nearing retirement with tons of experience, were brave enough to experiment with new ideas, when building their second home. The multitudes of levels in the house were meant to keep the ageing couple active with flexibility to fix a lift later. The butterfly roof design is an attempt to discover new contemporary design possibilities for a roof with an extended roof overhang. The residence was designed in section utilizing the site level differences, with tall rooms to create thermal air mass and provide thermal insulation. A certain unique contemporary aesthetic was created with the use of black powder coated glazed aluminium windows against the tactile qualities of the exposed brick exterior walls. Tall window was incorporated to frame the only existing tree at site the Mango tree when descending from the staircase ‘spine’ of the house. Long lasting finishes with low maintenance was used for the public areas of the house with the use of smooth cement float finished walls. Upper floor one meter cantilevering master bedroom overlooking the panorama of paddy fields was meant for the doctor couple to relax and enjoy their retirement after serving in public sector hospitals for decades. Skylights were used judiciously to bring in light into the interiors of the house along the staircase spine landing and upper floor toilet shower area, to increase the cheerfulness within the interior. The home is a relaxing retreat for the doctor couple indeed, helping them to keep an active lifestyle but at the same time at a slower pace than they were on call 24 hours during their hospital days. 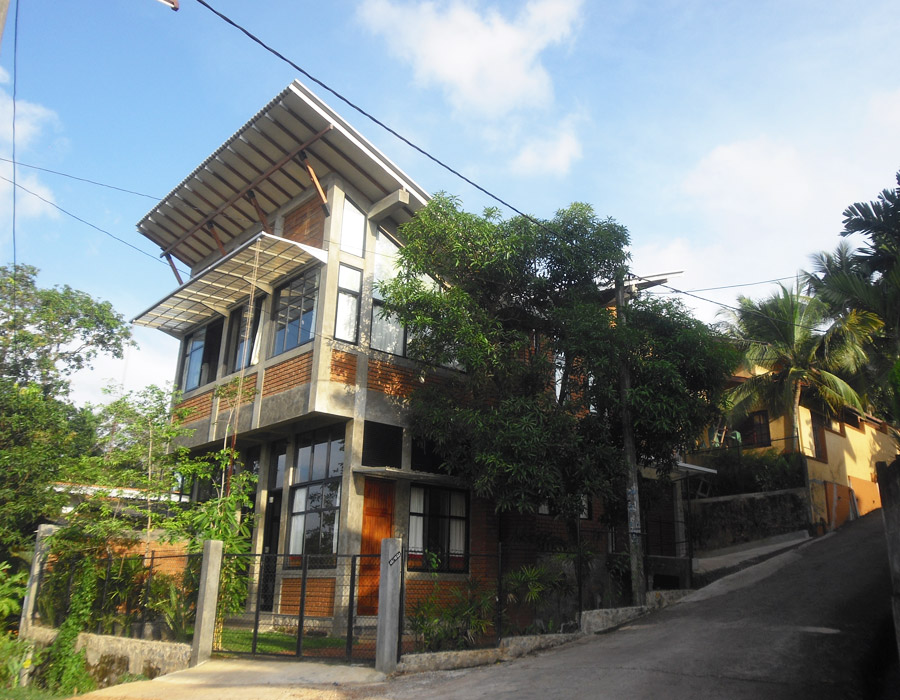 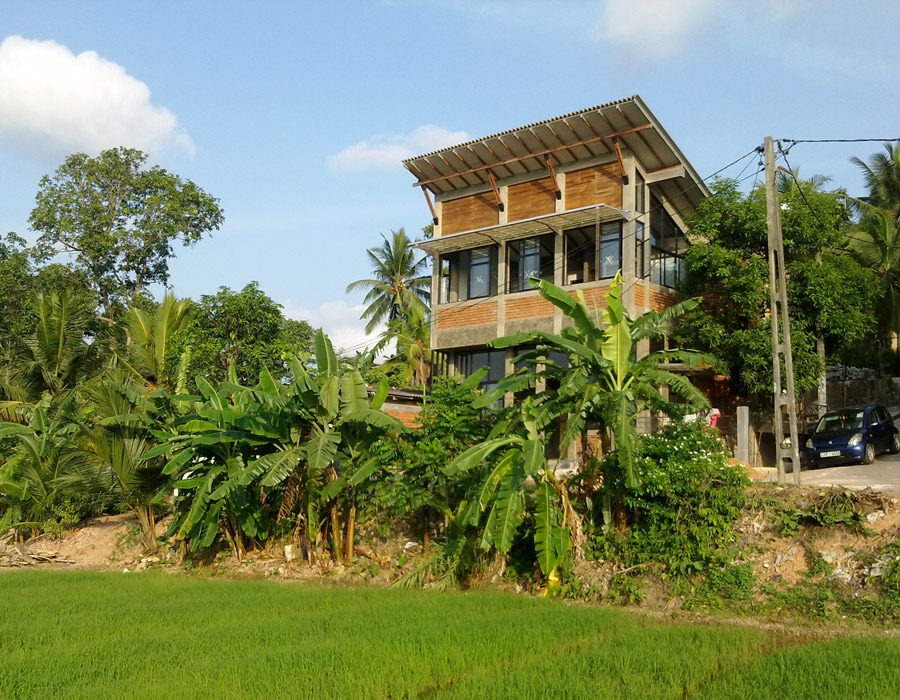 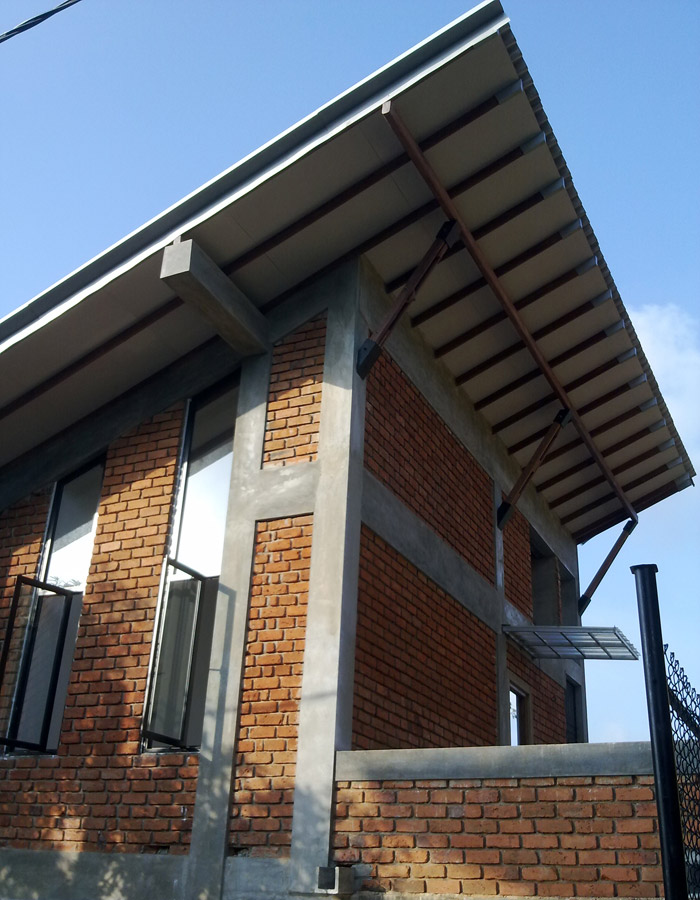 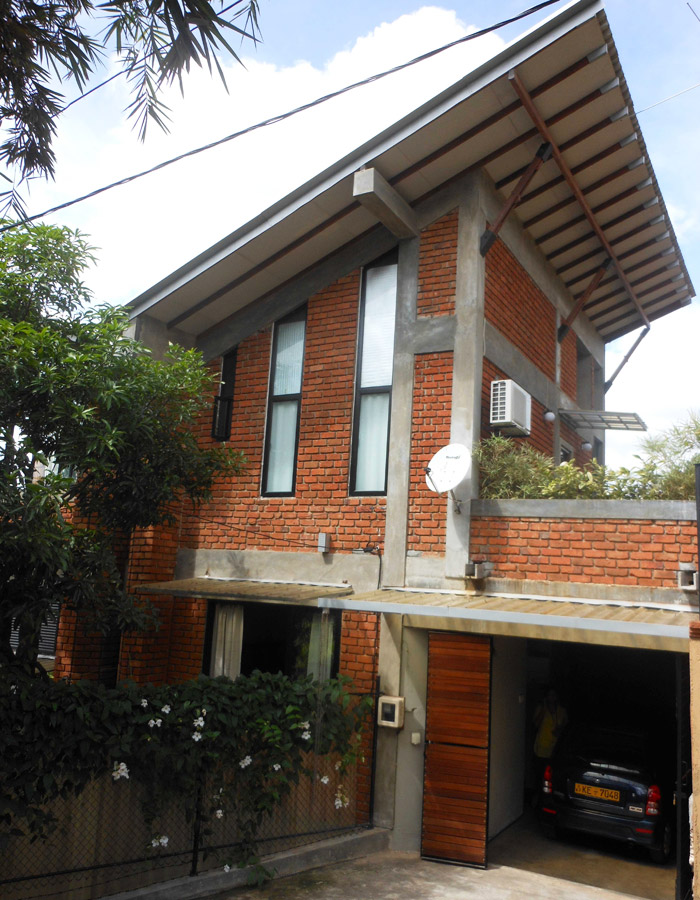 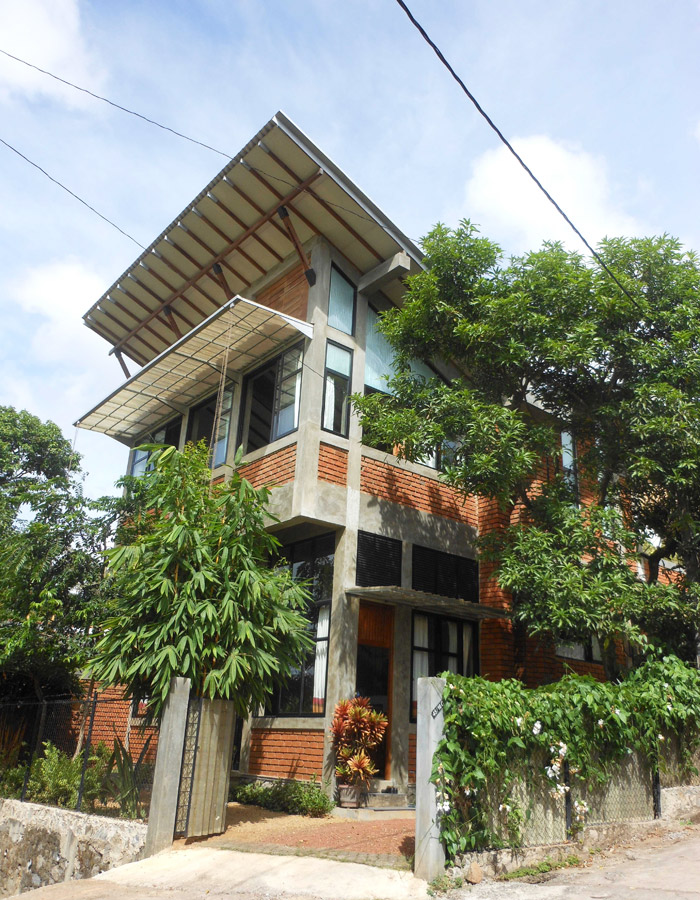 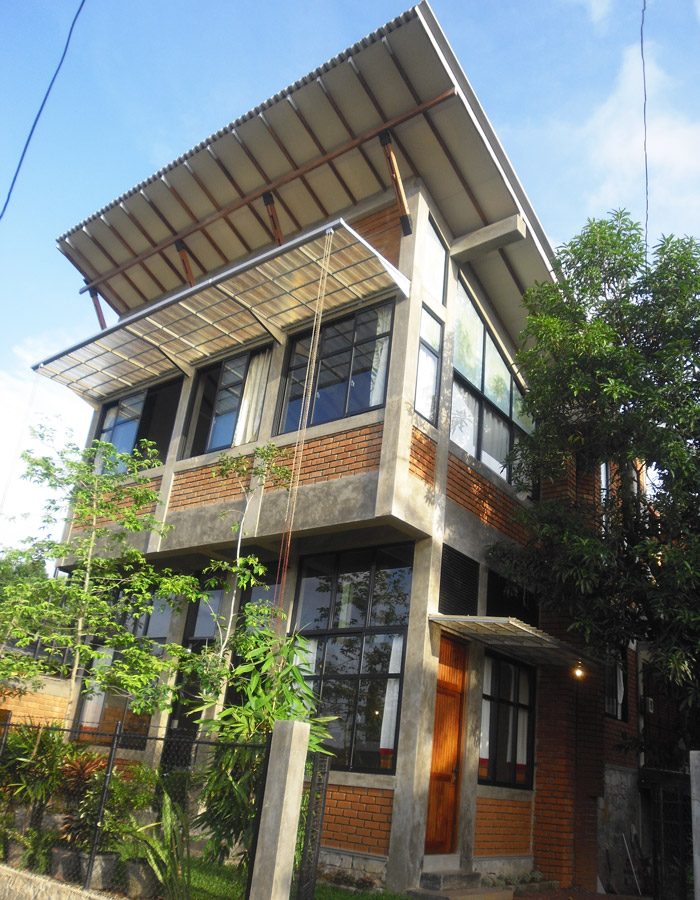